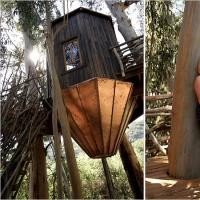 ‘When Christiana Wyly was in high school in Switzerland, she read the Italo Calvino novel â€œIl Barone Rampante,â€ or â€œThe Baron in the Trees,â€ and was captivated by its story of a boy who climbs into the trees and stays there for the rest of his life. Nearly a decade later, Ms. Wyly, an investor and a director of Zaadz, a sort of MySpace for the spiritual and environmentally conscious set, was still thinking about the book when she commissioned a 150-square-foot, $75,000 treehouse to serve as both a guest cottage and a refuge for herself and her daughter, Viola, at their home in the Santa Monica Mountains in Los Angeles County. Designed by Roderick Romero, an artist and musician in Manhattan who builds treehouses under the name Romero Studios, the house, completed in February, is shaped like a Moroccan lantern (to match the Moroccan furniture in the main house 100 feet away) and made of salvaged redwood from old olive oil tanks (the top and bottom are copper). Mr. Romero covered the staircase â€” eucalyptus branches fastened to eucalyptus railings and arches by hidden screws â€” with resin and salt; when the salt dissolved, it left little indentations, giving the steps traction. Ms. Wyly, 25, said she visits her treehouse retreat daily, to read, meditate and practice yoga, and to spend time with Viola, 4. â€œItâ€™s a quiet space,â€ she said, â€œcompletely silent except for the wind moving through the trees.â€ ‘