In 2005, the structure was voted one of the UK’s most hated buildings 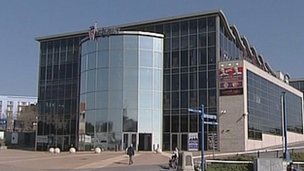 Workers have started dismantling a “hated” building in Bournemouth.

The Imax cinema, labelled an eyesore by residents who have complained it blocks sea views, is due to be completely demolished in early 2013.

But workers must first spend two months stripping the building’s fixtures and fittings.

A spokesman for Bournemouth Borough Council said a “new outdoor events space” would open in its place by next summer.

External deconstruction work will be carried out between January and March.