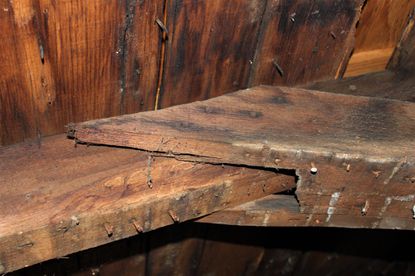 Attic beams at the former Massier family home at 321 W. Franklin Ave. in Naperville were notched out of timbers, perhaps in the 1880s. (Suzanne Baker / Naperville Sun)

Reichert said it would only be fitting to have lumber from the home recycled as furniture since Massier and his father and brother worked as furniture makers at Kroehler Manufacturing Co., which was once Naperville’s largest employer and, in the 1940s, the second-largest furniture maker in the United States.

Source: Board by board, an old Naperville house is deconstructed for preservation and reuse: ‘This place, it stands apart’ – Chicago Tribune