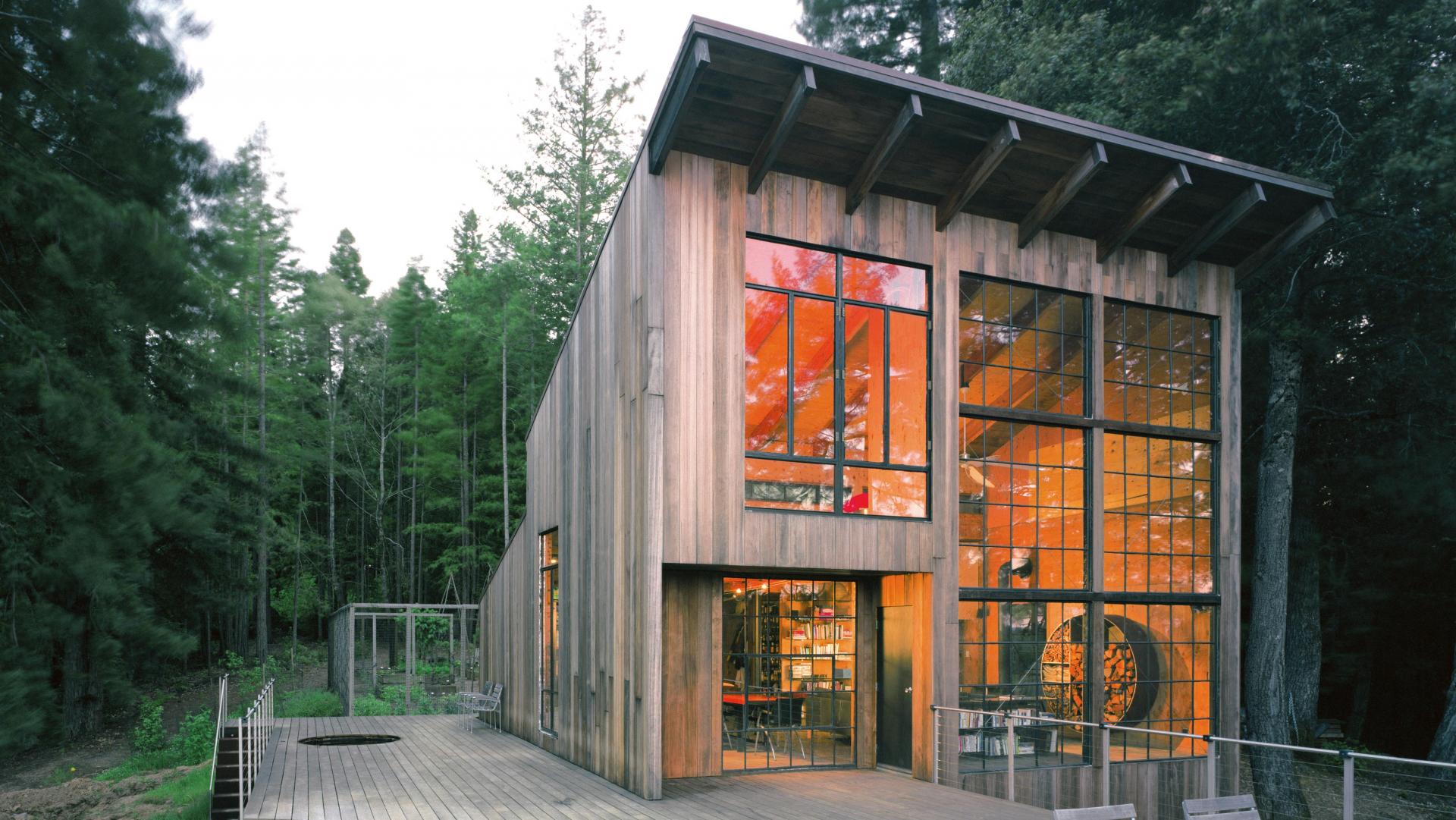 Most of the project has been built using reclaimed materials from various projects over the years. The windows are all steel sash from, at last count, five different remodel projects. The pool is perhaps the most notable example; it used to be a water tank for livestock. At 25-feet diameter and 14-feet deep it provides a wonderful black hole of water, particularly in a full moon. 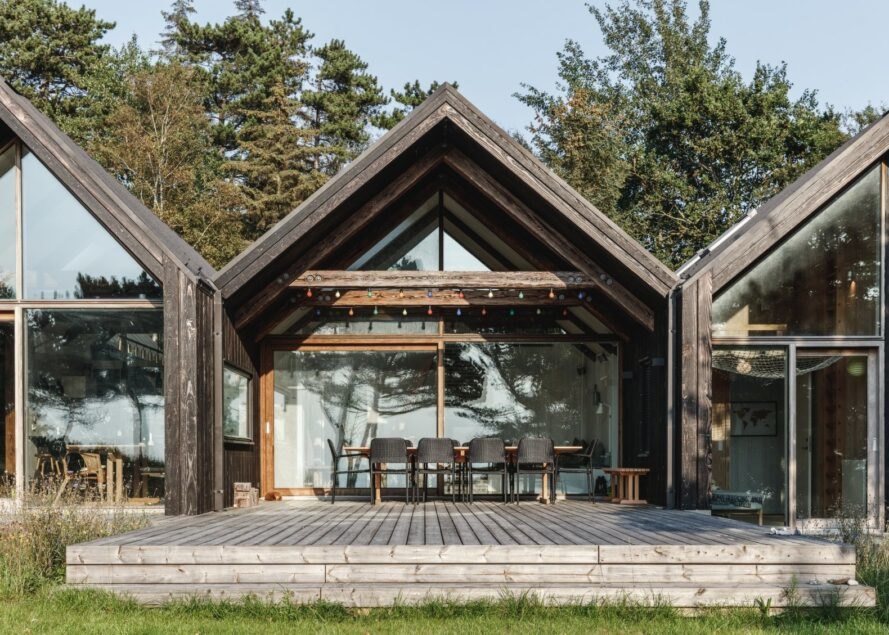 Designed by Nordhavn-based Lendager Group, the Holiday Cabin consists of five connected structures, all of which are constructed from upcycled waste materials found from demolition sites and local factories. 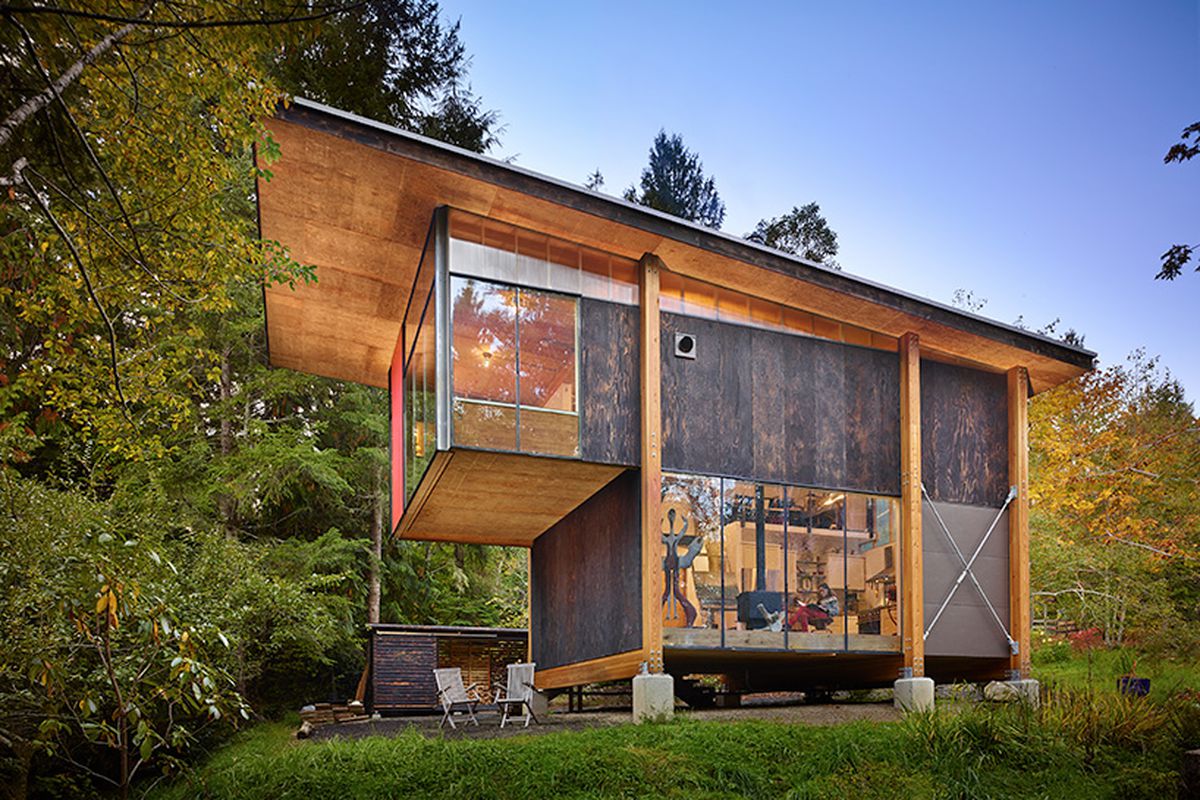 The eclectic-looking Scavenger Studio was made from reclaimed materials. Photos by Ben Benscheider via Designboom

This modern cabin in Puget Sound, Washington, incorporates a hodgepodge of reclaimed materials from homes about to be demolished, creating an eclectic forest retreat that is anything but ordinary. 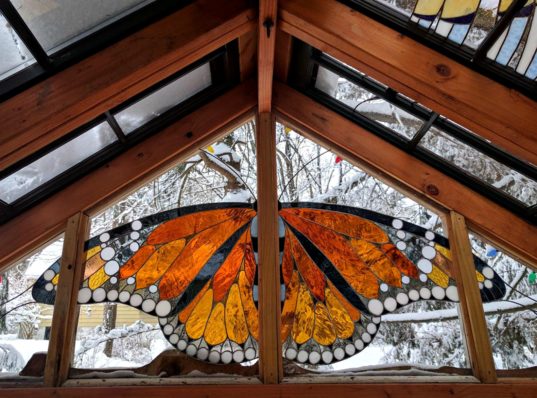 The tiny retreat is made almost entirely from repurposed window frames and lumber, and its handcrafted stained glass panels depict flowers, birds, butterflies, and other nature-inspired scenes. 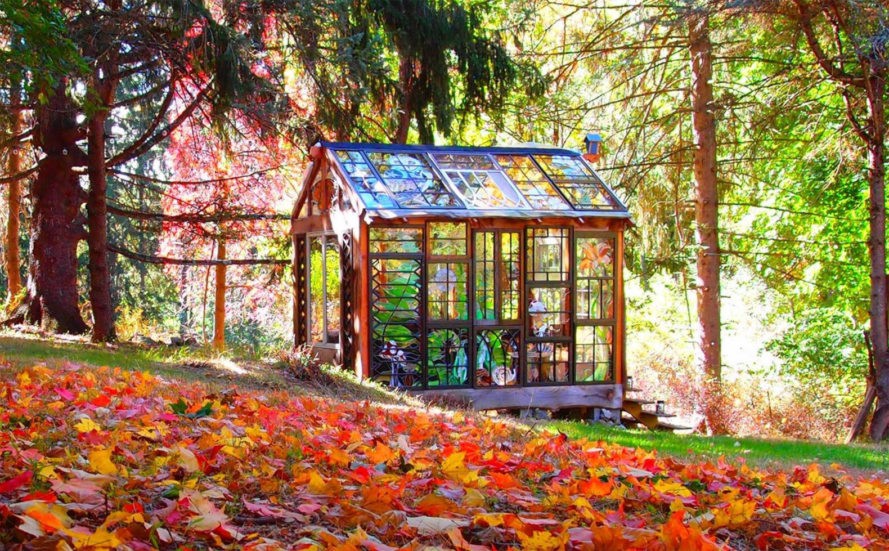 Designed and built by a local architecture student, the tiny cozy cabin was created as a contemplative retreat in the aurora forest of Northern Norway. The cabin was crafted from recycled materials supplemented with local timber, and features a solar panel strong enough to power a laptop and lighting.

According to Diedricksen, the cabin wasn’t even planned – it just came along as kind of an afterthought during one of his small home building workshops. Being a long-time collector of salvaged and donated building materials, he had just about everything he needed on hand already.

We posted about this once already – but this tour is so worth another visit!

Brian Schulz wanted to see “how small of a house I could make feel big”. Inspired by the traditional Japanese minka homes that rely on local materials and steeply sloped roofs to create affordable, open structures, Schulz created a home using materials salvaged or sourced from within 10 miles of his home.

You know when something is so beautiful it hurts?

That is how I felt when I first saw the Japanese Forest House on Curbed.  Brian Schulz’s sense of humor eased my heartache a little, but scrolling through the pictures of his beloved house brings it all back in a flash.

Treat yourself today and go see this labor of love in all it’s glory! 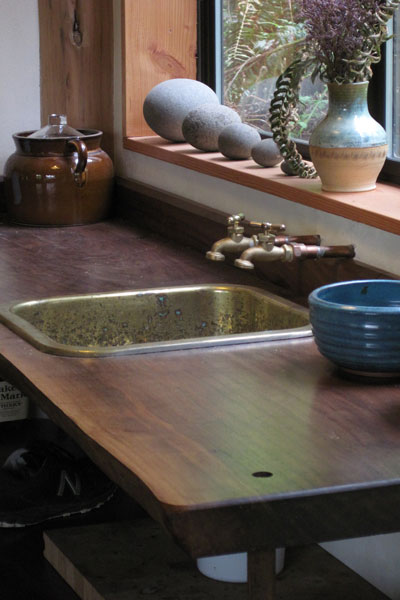 A couple years ago I found a neat little brass sink at the local recycle center.   Enamored of shiny objects,  I coveted it’s golden glow,  entirely aware of the fact that I had no use for such a thing.   I wandered around for an hour or so with it in my hand,  looking at other stuff,  relalizing that if I took it I’d have to build a home for it.   I eventually brought it up to the register and started planning my house on the drive home.

Yes,  I am serious,  and don’t call me shirley.

With deep enough pockets a person might be able to duplicate such a structure by writing a large check to a talented builder,  but that would risk missing the point entirely.   Almost every piece of this tiny house was salvaged,  most of it from within a ten miles of where the house sits. 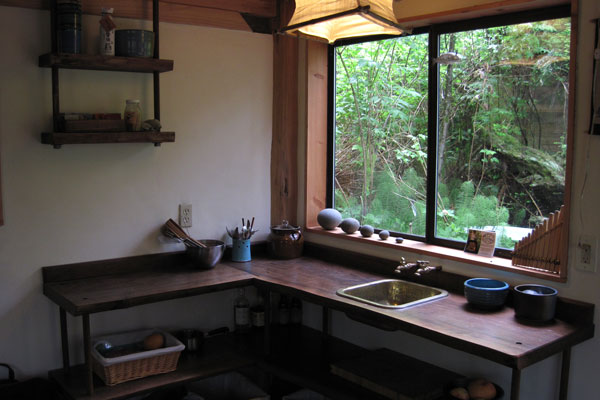 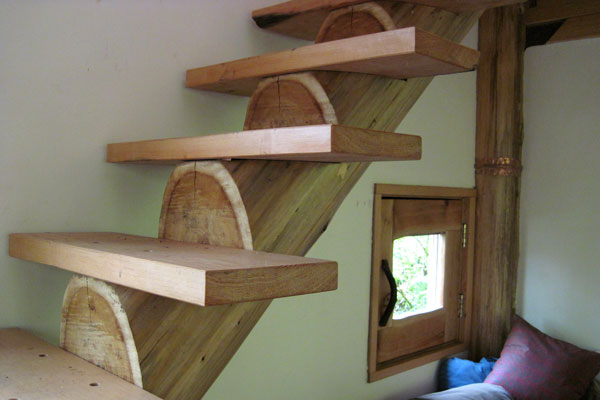 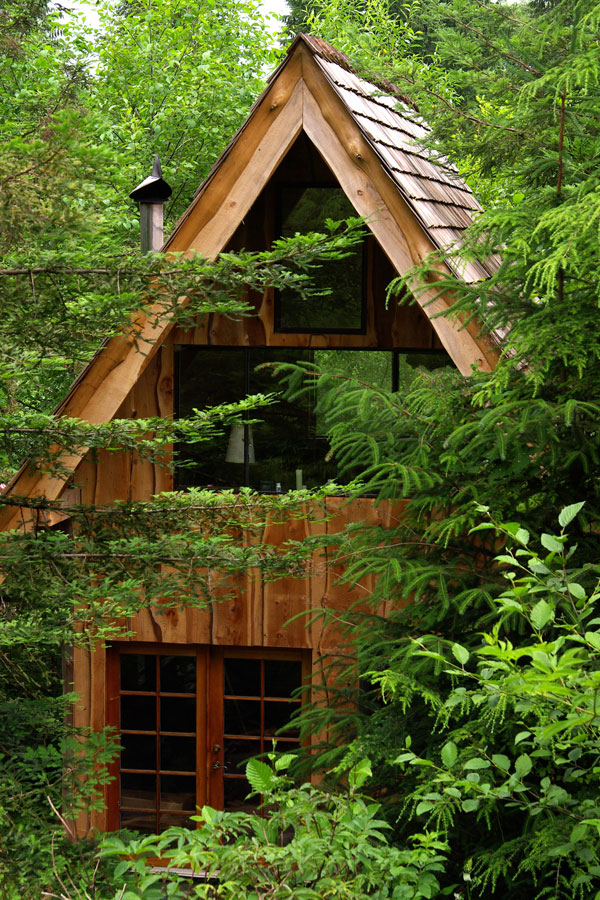 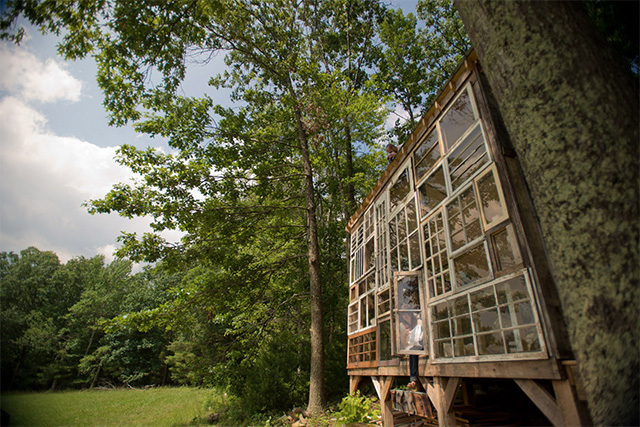 In 2012, Nick Olson and Lilah Horwitz quit their jobs and set off to build a glass cabin in the mountains of West Virginia.

Nick is a photographer who specializes in tintypes taken with a camera he made himself. He currently works for a landscape company in Milwaukee designing one-of-a-kind objects and spends his off time travelling the country looking for adventure. Lilah is a designer. She has made several clothing lines, each one coinciding with the a city/place she inhabits. She currently sells her work in New York boutiques and also works for a landscaping company in Milwaukee Wisconsin. Much of the house is clad with old wood from fences and old buildings, see below… Some parts of the house are even from a chicken coop, like that wall down there. The timbers used on the pictures above and below are recycled from old boxcars and a hot springs water tower. Parts of the kitchen, including the cabinets, came from an old motel. via Small Rustic Cabin on 40 Acres in Colorado with Mountain Views for Sale.

The image of a secluded cabin in the woods recalls the simple, idealistic idyll of Henry David Thoreau’s Walden, free of the impositions of society. This beautiful micro-cabin, built beside a lake in Finland, was constructed to go under the radar of Finnish building regulations, which require one to get a permit for anything that is larger than 96 to 128 square feet, depending on the district.

Anticipating a one-year stint in the military, owner Robin Falck decided to design a cabin that wouldn’t require getting tangled in bureaucratic red tape. Built with a 50 square foot loft above for sleeping and storage, and a ground floor lounge/living area and kitchen and bathroom, the house is designed to maximize the allowed area, plus boosting the capacity for great acoustics and natural daylighting. In addition to the tall window, there’s an adjacent deck for a great view of the tranquil surroundings.

On Tiny House Listings, he talks about his cabin, which he has dubbed “Nido” (or “bird’s nest” in Italian):

A couple years back in 2009 I got this idea of an cabin/small house that would be small enough to be built without the need of a permit. In Finland it’s 96-128 sq. ft. (depending on where you are). So I started daydreaming about different possibilities and didn’t really believe that I would one day actually build it.

Well, a year later, suddenly, after almost forgetting the whole idea I got obsessed and set out to actually design it. Probably a combination of the fact that my military service was approaching and after sketching and calculating it seemed so possible.

Winter of 2009/2010 I spent designing and planning the house. I contacted a couple of architects that were really kind to help out with some of the more technical stuff.

Then came summer and the construction began. I had already chosen the place and had it in mind when designing the cabin. On June the 5th I started and 2 weeks later the only thing missing where the window and door which arrived a couple weeks later.

Best of all, Falck says that he was able to find recycled materials for the majority of the construction, and he estimates that the cost was somewhere around US $10,500 plus labour, which isn’t too bad for a photogenic little lakeside shelter such as this. More over at Tiny House Listings.