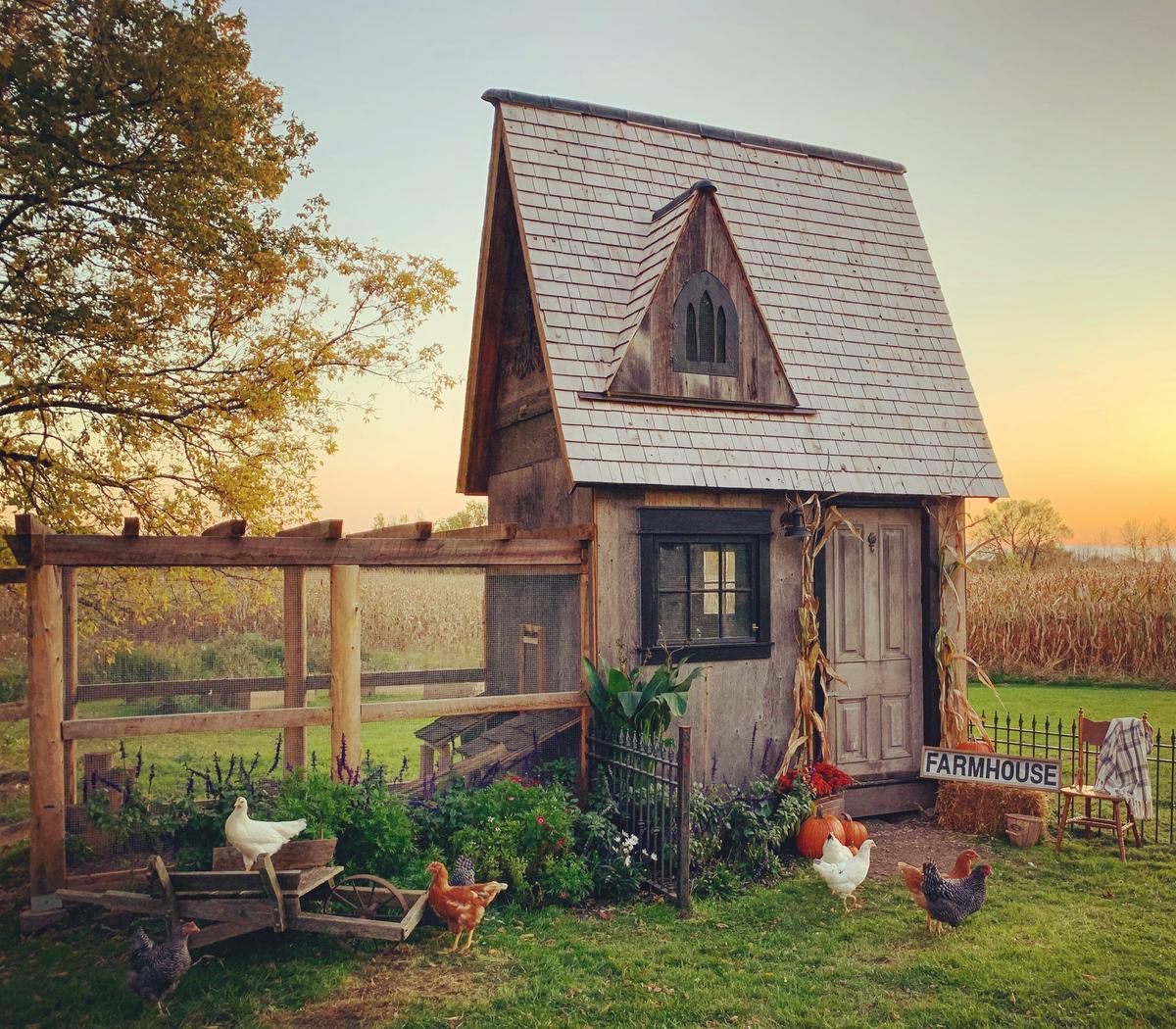 Crafted from rustic barn board and other reclaimed materials, it’s multi-purpose, practical and storybook-pretty.

Source: This little DIY house is a feather in his cap | The Star

With my partner Christopher’s help they free-form patterned a shell to house the up-cycled parts. The bottom of the original hutch with the double doors became the front of the coop, the shelving became the back, while the night stand became the egg box.

Bendetto, known for his visual puns, modified the vehicle to accommodate his feathered friends by gutting the interior and extending the doors and rear with wood and chicken wire. Dubbed, “La Voiture de Police Poulailler”, the piece of social commentary is also an excellent example of creative upcycling.

via Make Shingles and Siding Out of Aluminum Cans (Beer Can Roof).

Here’s an inspiring story for aspiring DIYers: Matt Pike, a contractor living in Marshall, North Carolina, realized just last weekend that he needed to build a coop for the quickly growing 20 chicks that call his farm home. Luckily for Matt, he was in the process of building two homes (for his family and his next door in-laws). So he dived into the scrap pile and got to work.

The coop is made up of two 4′ by 8′ pallets, a salvaged tin roof purchased at a flea market, assorted lumber, and shingles made from empty beer cans. Matt bought the chicken wire and the latches for the gates, and spent less than $40 on the whole shebang, which he built in less than ten hours.

The coop is hardly a work of art, but it’s functional. Of his process, Matt wrote in an e-mail:

I literally dumped a big pile [of scrap] on the ground and started nailing stuff together…I didn’t make a single cut until I filled in the end walls and put the roof on (the carpentry work is probably the worst I’ve ever done, and I did most of the cutting with a chainsaw).

Beauty aside, it goes to show that it doesn’t take a big investment of money or time or an overly fancy design to get the job done. Though as a contractor, Matt presumably is an experienced carpenter.

If you’re interested in building your own coop, it’s not especially hard- Sami lays out how to go about it here.

via Homemade Chicken Coop with Beer Can Shingles Was Built in 10 Hours for $40 : TreeHugger.

Designed to provide a deluxe home for your backyard flock,  the innovative and sustainable design comes from Portland-based architecture firm Wright Design Office.The coops have a water supply port and a pest-protected feeding section, roosting box, egg access hatch and perch level viewing windows. A ladder is used to access the interior, and being raised off the ground helps provide extra vermin and predator protection.

The chicken coop sits in a chicken run which is approximately 24″ wide x 48″ long x 42″ high (60cms x 120cms x 107cms) including the ladder. Additional chicken coops can be added lengthwise or side-by-side to increase the chicken run area. The chicken house can be permanent or made as a mobile coop to allow the hens to do their aerating and fertilizing of the soil.

Bonus Material: How to Wash Your Chicken