Every reuse center on the planet should follow Community Forklift’s example of partnering with Maker Fairs. This is a unstoppable combination of creativity, education, and waste reducing fun!

The Reuse Community and the Makers are world changers and together can shift waste consciousnesses.

A Maker Faire features free family activities and innovative projects created by inventors, hackers, crafters, artists, and do-it-yourselfers of all kinds. The festival demonstrates creative and unusual projects and pursuits to encourage attendees to explore their own curiosity and to make something new and different.

David Kemp created a whale from two derelict cove-boats and thus stole my heart. Below are excerpts from his website. Pay a visit and be amazed!

The artist David Kemp lives and works on the far western coast of Cornwall, among the old mine workings near Botallack. He finds material for his work in rich seams of junk, appearing here and there at boot fairs, but adding up, in the imagination, to something like that mysterious productive heap of dust in Dickens’ Our Mutual Friend. In fact there is an almost Dickensian breadth of vision, richness of character and sharpness of observation in Kemp’s work.

David Kemp’s work is serious fun: serious, because his intention is to tackle our folly and or materialist excesses and fun because he is a master of life-enhancing humour.

Driven by his own apocalyptic and subversive vision, he makes sculpture from the disregarded bits and pieces left by successive consumer boom. These remains point out the awful truth – that we value trash and are seduced again and again by the trumped-up new. Technology that is phoney, or only half understood, is grasped at for answers to our needs. In pursuit of the largest thing, it becomes impossible to tell real technological advances from the dead-ends.

This point is made for this exhibition particularly by reference to electricity. The rush to harness the power of frog’s legs, to make hair stand on end or capture lightning were all so far beside the point – of course we know now, but in Kemp’s alternative world they have a different and more telling relevance. By making what might have been, or should have been, invented he mirrors universal human weaknes.

Like what you see on here on the Reclamation Administration?

So do thousands of others!

Thinking about advertising with us? Good idea!

Here’s what you should know about the Reclamation Administration: 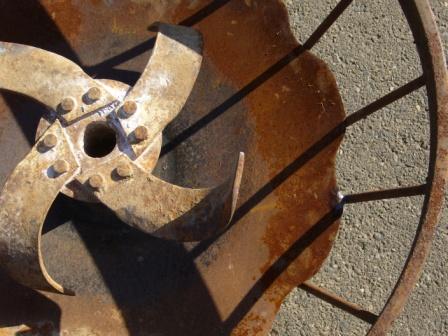 * we span all levels of building material reuse, from reuse design in art and architecture to public policy on waste diversion A few weeks later, the homemaker showed off the refinished $150 mantel now decorating the brick fireplace in her renovated kitchen. After she sanded the worn piece, its elegant lines emerged from under several coats of paint.

The carved wooden frame hanging above the mantel and the stone tile on the hearth also came from Community Forklift, as did several pieces of furniture in the living room. “This is a way of getting heirlooms without having to inherit things from relatives,” she says.

From the salvaged windows and other recycled elements, she and her husband built a one-room pavilion in a corner of their back yard. “It cost us about $1,500 to complete, compared to the $25,000 that one contractor told us it would take to construct from new materials,” says Derek Liu, 44, a systems engineer.

The type of repurposing practiced by the Lius is growing, as more homeowners look for cost-saving and environmentally friendly ways to renovate. At Community Forklift, sales of salvaged products — from Tiffany-style lamps to toilets — increased from 2011 to 2012 by 46 percent. The eco-conscious home improvement center plans to expand into a nearby 15,800-square-foot warehouse in Prince George’s County in the fall.

via Homeowners turn to salvage renovation – The Washington Post.

Two young designers from Turin have created Deformazione Professionale – a line of clever new furnishings made from old unwanted doors.

We’ve covered The Design Pallet before. We think they are great. Check out their latest endeavor the Wakefield Rustic Dining Table.

Peter McFarlane‘s artistic vision is a nice treat this morning.

It came to the RA via a site called Visual News  who’s managing editor Benjamin Starr has the best bio we’ve read in a while.

Much of McFarlane’s material comes from dumpster diving, an activity which helps to keep him humble: “I have found there’s nothing like garbage picking to ward off the glorification of middle class ideals.” We like that. Considering there’s far more than scrap metal floating around, he’s also worked with sculpting and collaging discarded circuit boards, as well as drawing aspects of industrial society. You can see more of his fantastic work at petermcfarlane.com.

It was a last-minute decision for which my husband thought I had maybe gone mad, but I decided to try hanging the shutters horizontally above the sofa because we had tall ceilings, and I didnʼt have anything quite big enough to proportionally fill the space. We had traipsed to the far corners of New Orleans to a salvage yard to find these after I had set my heart set on bringing home a piece of architectural history from a city we both love. In the end, we loved having these special mementos from a cross-country road trip as such a prominent feature in our apartment.

Read the whole article via Design*Sponge | Your home for all things Design. Home Tours, DIY Project, City Guides, Shopping Guides, Before & Afters and much more.

How long has it been since you thought about your elementary school desk? Mine was made from a combination of metal and some type of faux wood (perfect for graffiti), with an open slot underneath for my notebooks and pencils. It came with a tiny little chair made from similar materials.

After years and years of abuse from young kids, it eventually becomes necessary to replace school equipment like desks, tables, and chairs. Although they may be covered in dings and scuff marks, most of this equipment is perfectly usable, albeit a little small for the average adult. Instead of letting all this equipment end up in the landfill, LA-based designer Dexter Zhao decided to upcycle it into nostalgic furniture that will allow us to continue the learning experience. Reclaimed Oak (primarily from 1800s) iPad easel is simple and wonderfully useful for the kitchen, office, bedroom &c. The easel transforms from wall mount to desktop base. The peg holds the base in place when in the wall mount but also serves as a pivot point for turning the iPad to face you depending upon your location in the room. Yes, this is a BBQ / camp-fire made of an old washing machine. Due to the open structure of the drum, oxygen access is no problem. Due to its origin (yes Byrds) it still can Turn, Turn, Turn. Centrifuge to BBQ!

via Amazing Washing Machine BBQ – 1/4 – The Fire Within – YouTube.

Mike Urban welds the most enchanting dinosaur sculptures for the yard or garden from bits of metal. Reclaimed scraps from tractors, shovels and other implements give the dinosaurs even more charm.

uhuru, to me, may have been the most impressive furniture designers I saw at BKLYN Designs in terms of their creative reuse of industrial products.

For example: the Stave Bench and the Bilge Lounge reuse whiskey barrels from the finest white oak. These barells are charred and used only once in the barreling process then discarded or sold.

uhuru purchases these barrels and leaves the barrells in a state very close to where they found them to make these beautiful chairs and tables shown above and below. This is what I would consider a very low energy intensive form of recycling which in my mind is the best form of recycling.

But uhuru’s commitment to this type of recycling does not stop with whiskey barrels. They have a variety of products that make use of whatever industrial scrap might be around. Their website features products such as the Fenced In Table made from repourposed fence parts- this table you won’t believe.