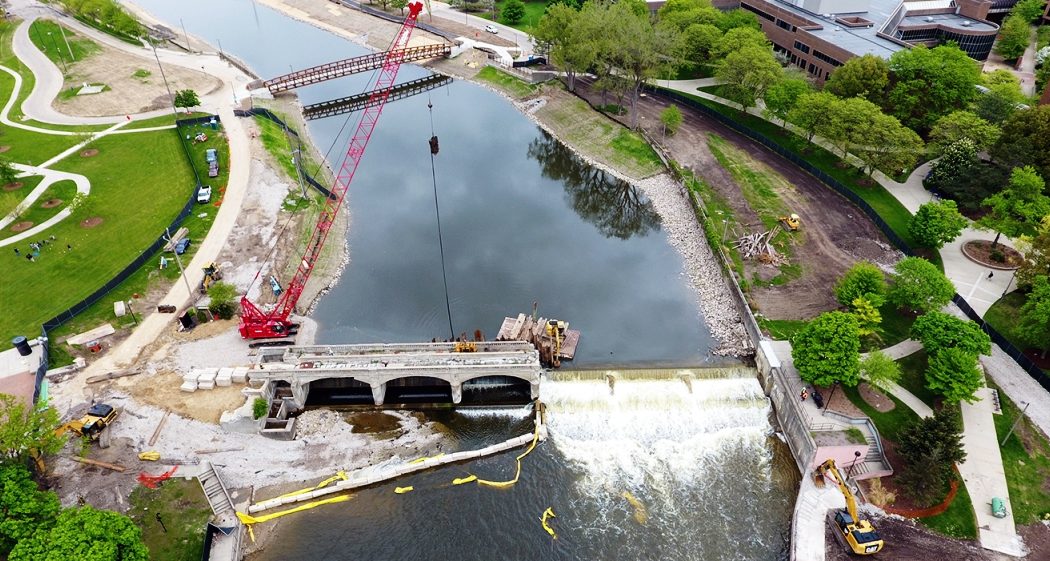 Naturalizing the stretch of river that snakes through downtown Flint will transform a concrete wasteland into a usable public space that is aesthetically pleasing. It also will complement the rest of the 142-mile long Flint River, parts of which are as remote and scenic as rivers in northern Michigan.

A $450 million plan to demolish four dams on the Klamath River was supposed to be approved by Congress in March of 2012. But a new year has arrived without the go-ahead, and local supporters of the removal plan say they see no definite approval date in sight. via Daily Journal of Commerce.

Dont count on seeing those category five whitewater rapids in the Cuyahoga River this summer. But theres a good chance youll be riding them next year.

Deconstruction of the Samira and Sheraton dams on the Cuyahoga River will begin right after the city’s bicentennial celebration, said city engineer Tony Demasi. If all goes well, the dams could be down by Dec. 1.

“A lot of work that we’re going to be doing is going to be behind the scenes,” Demasi said. “Designs need to be finalized and permits need to be approved before the Army Corps of Engineers and the contractors can start work on the river. We may not see any construction until September or October.”

Previous delays and a lawsuit brought by Beaver Falls Excavation have stalled the process to remove the nearly 100-year-old dams and restore the Cuyahoga River. The project is paid for with a $1 million grant from the Northeast Ohio Regional Sewage District through the Ohio Environmental Protection Agency.

INDIAN ISLAND — Bill Towsend is an old man now, at 84, but steady enough on his feet to walk down the muddy bank of the Penobscot River and watch as excavators smashed the defunct concrete fishway of the Great Works Dam.

“I am so excited to listen to the sound of those jackhammers whacking away at that concrete,” he said on Monday as he observed the first day of a five-month project to remove the dam. “This is a day I knew would come, but I didn’t know when.”

Townsend, a leader in salmon habitat protection, was a middle-aged man 26 years ago when he launched a fight against a proposed hydroelectric dam at Basin Mills, just downstream from here. The federal government’s decision more than a decade later to kill that project set in motion an ambitious plan for the river’s revival.

Although decades in the making, Monday’s events marked the official start of a $62 million effort to remove two dams and improve fish passages at two other dams.

The project is viewed as a model for other restoration efforts in the nation because of a collaborative approach involving environmentalists, hydro power companies, the federal government and the Penobscot Indians.

The terms of a multi-party agreement will allow power companies to increase power generation elsewhere in the river watershed so there will be no loss of power production.

“It’s really a great day for America and a great example for anyone who believes anything is possible,” said Ken Salazar, secretary of the U.S. Department of the Interior, at a news conference on Monday on the riverbank in the town of Bradley.

END_OF_DOCUMENT_TOKEN_TO_BE_REPLACED

In the two years since the Dillsboro Dam was torn down, the Tuckasegee River has become home to a growing number of aquatic species, from mussels to insects to fish, as natural river habitat has been restored.

Duke Energy demolished the 12-foot high, 310-foot long dam in February 2010 as environmental mitigation for several other larger dams it operates in the region. Jackson County battled for seven years to keep the dam. It wanted to make the dam a centerpiece of a new public park and promenade, complete with walking paths, benches, fishing areas and river access. Plus, the county argued the dam was historically important to the community.

Duke, however, succeeded in removing the small and ancient dam as compensation for using the Tuck in its lucrative hydropower operations, which net the utility millions annually.

Duke’s contention that the river would be better off environmentally without the Dillsboro dam does seem to have come true, according to Cantrell.

“What we’re seeing now is the rebirth of that section of river and a confirmation of the decision to remove it. There’s no question about it — if you are an angler, boater, fish or bug, the Tuckasegee River is better with the Dillsboro Dam removed,” he said.

Jackson County trout fisherman Craig Green said that he supported the removal of the dam and has been happy to see the river return to its natural free-flowing state.

“Recovery is a strange word — it wasn’t that things were bad, but clearly the dam removal has enhanced the flow for the fish to move back and forth,” said Green, who is a past president of the Watershed Association of the Tuckasegee River.