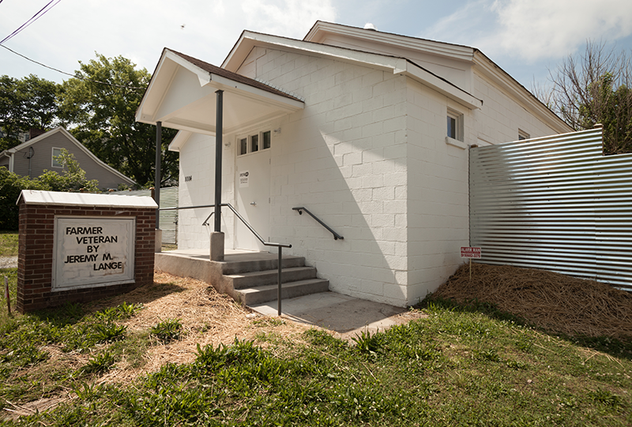 The first thing a longtime resident of Durham likely will notice about SPECTRE is that it is a renovated former church. The sign that once told parishioners and visitors about services now advertises “Farmer Veteran,” an exhibit of prints by Jeremy Lange, Alicia’s husband. The front door opens into a different kind of sanctuary, a well-lighted, airy gallery space. The building also has two artists’ studios in the back, along with kitchen and other facilities for events.

For the past year and a half, the Langes have been working with a construction company, gutting the walls, lowering and refurbishing the floors, and where possible finding ways to reuse the old wood from the building.

via A different sanctuary: Former church now an arts-performance space | The Herald-Sun.

I recently visited an American city with many downtown buildings from a long-departed industry. The city’s downtown is now experiencing new life, and many of the historic buildings are finding new uses after sitting vacant for many years.

This is a complex of old warehouses which have now become retail and offices. The developer added a really amazing water feature, a long river which cascades down waterfalls at various intervals. There are small footbridges across the river and even stepping stones to cross in one place.

The old chutes for the products remain and now serve as decorative flourishes. In the center is an old railcar, like those that once transported goods to and from the facility.

At another location nearby, people have turned several old garages into bars and music halls. They’ve also become a popular spot for food trucks, and 2 were sitting outside as we passed by on a Saturday.

Both of these demonstrate the preservation concept of “adaptive reuse.” Old, historic buildings can become a valued part of a changing community by taking on different functions that residents need today. The distinct architecture of the structures and the small details that nobody would build today adds character and interest.

Bonus question: Can you guess the city?

Update: Several commenters got it very quickly. This is Durham, North Carolina. The large development is the American Tobacco Campus, where tobacco warehouses have become high-end retail adjacent to the new stadium for the Durham Bulls. The garage-turned-bar and music hall is called Motorco, in honor of the building’s historic use.