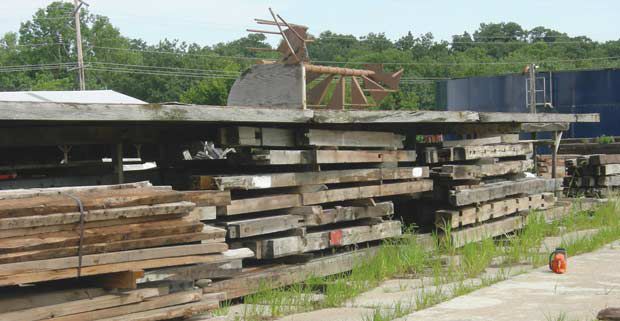 Aaron Williams stores reclaimed barnwood for his business, Willow Architectural Salvage. He says for every one barn where the wood is salvaged, another 100 are burned or bulldozed. Photos courtesy Aaron Williams.

He has been growing the Willow Architectural Salvage business ever since. “It still allows me to farm,” says Williams, who grows corn and soybeans near Waverly about 30 miles south of Springfield. “Being a farmer, I understand farm families. It’s a good fit,” he says of the business. HOWEVER, DESPITE the popularity of barn wood today, a surprising amount of barns are wasted. “For every one that we salvage about 100 get burned or bulldozed,” Williams says. Some of those barns were built 150 years ago for livestock and when equipment was smaller. Such buildings are expensive to maintain. “Some of these cities waited for somebody to come and solve their problems for them. That day is no longer with us,” Uwe Brandes, executive director of the Masters Program in Urban and regional Planning at Georgetown University, said.

Since 2010, eight cities and towns have filed for bankruptcy. The economic crisis has led residents to join forces to find creative ways to rescue and rebuild their communities.

“My friend and I had this idea, well, why don’t we just grow food in the city. Seems like a really easy plan right?” Cheryl Carmona, in Baltimore, Md., said.

From that idea grew Boone Street Farm, an urban garden in a rundown East Baltimore neighborhood.

At a gathering of Central Jersey organic farmers recently — it was a potluck — I listened in on a conversation between two of the veteran farmers in the room. They weren’t exactly elderly; they just weren’t in their 20s like almost everyone else in attendance. The two farmers discussed how a decade ago, the same potluck would have been a quiet, sparsely populated affair. Tonight the room was alive.

It won’t stay that way unless we find those youngsters some well-drained Garden State farmland to call their own. I suspect it’s the same story all across this nation.

Read the entire article via For young farmers: No land, but plenty of climate change to go around | Grist.

What happens when you get everyday people thinking about the challenges that have occupied city planners for years — and give them the tools to do something about it? The City 2.0 project recently caught our attention for doing just that, and now we’ve seen nonprofits like the Network Center for Community Change in Kentucky and People United for Sustainable Housing (PUSH) in New York using this people-powered approach to tackle a key issue in creating sustainable, livable neighborhoods: vacant buildings and lots.

Network Center for Community Change, a community action group based in Louisville, has been mapping neighborhoods to identify vacant lots and houses that need renovation, along with more stable pieces of property. In so doing, it aims to help the community make decisions that better reflect local conditions and needs. Once these “opportunities for improvement” have been established, the group mobilizes residents and other stakeholders to work with municipal authorities in developing strategic redevelopment projects that will boost local property values, increase quality of life in the neighborhood, and/or create jobs.

The Network started this Louisville initiative back in 2010 because it realized that official statistics concerning vacant properties in the area were often inaccurate, often by as much as 30 percent in either direction. Having accurate numbers, in terms of neighborhood vacancies, has aided the group in getting local elected officials on board with the development/redevelopment projects deemed most critical by the people who actually live and work in these communities.

In Buffalo, a related effort is underway with the Green Development Zone, a project of PUSH. This grassroots effort began with the intention of creating a new community economy in a blighted 25-square block area of the city’s West Side — which, like many urban areas across the country, was faced with deteriorating housing, hundreds of vacant lots, and fewer and fewer jobs for local residents. In 2005, residents discovered that a New York State housing agency was using these vacant houses and lots in Buffalo to speculate on Wall Street; the organization formed and proceeded to launch a militant campaign in response to this that resulted in millions of dollars for the state’s neighborhoods through New York’s Block by Block program.

Using people power, PUSH was able to start rehabilitating neglected housing on the West Side. In 2011, those efforts paid off in widespread recognition, as the Green Development Zone initiative was one of three programs from a list of dozens of sustainable housing efforts around the world to win the award for Sustainable Housing: Collaborating for Livable and Inclusive Cities from Ashoka Changemakers, an organization dedicated to collaboration in the service of affecting global change.

Through this and other programs, PUSH has succeeded in insulating and winterizing older homes in Buffalo, developing new green affordable housing units, building the city’s first Net-Zero Energy House, and a major park renovation/improvement (created with widespread community input), as well as turning numerous vacant properties into community gardens and rain gardens.