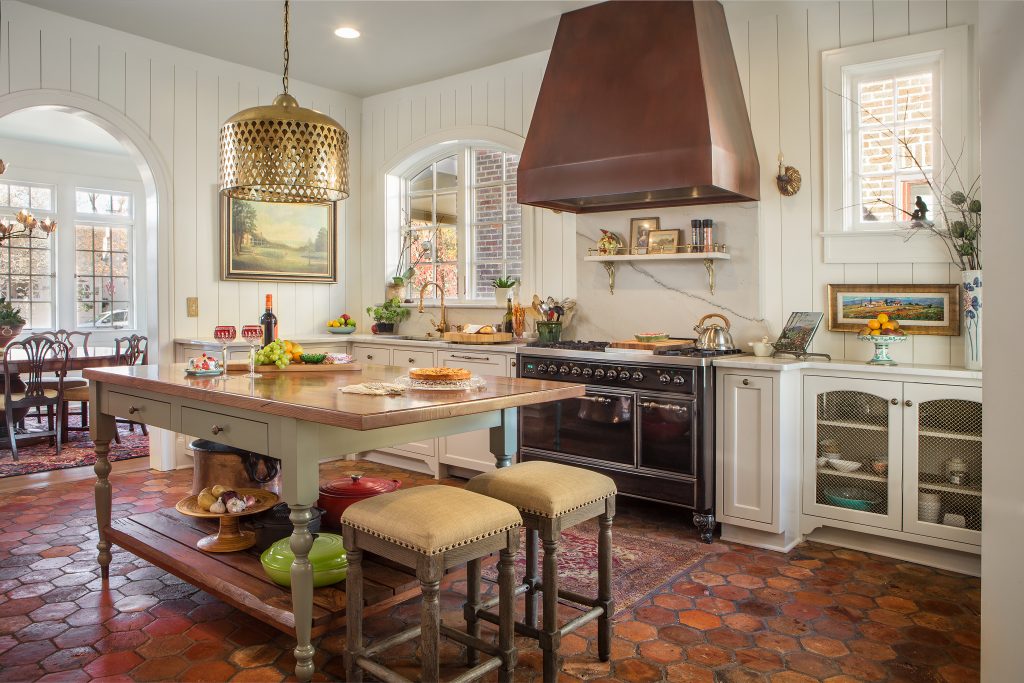 Jenni and Andy Wilson’s move to a 1923 Tudor Revival on South Edisto was, for Jenni, a dream come true. Marrying old and new architecture with a classic cottage feel, the renovation is masterful. The 100 to 200 year old reclaimed French terracotta floor tiles in the kitchen are the pièces de résistance, and the ILVE Italian 48-inch black enameled range with brass claw feet is a much used and loved focal point.

The island is made from reclaimed heart pine from the house.

Nancy Angerman, left, and her husband, Tom Hutter, stand outside their home that used to be a old hay barn in Ravenna, Ohio. / MCT/Ed Suba Jr./Akron Beacon Journal

So choosing to build a house by reconstructing an old barn and outfitting it with things like salvaged brick and torn-up sidewalks was hardly out of character for them — even 25 years ago, before reclaiming architectural salvage became trendy.

The couple’s home is a 19th-Century barn that Hutter and a crew dismantled and moved from Sharon Township, Ohio. Refurbishing the barn has been Hutter’s passion, a project accomplished a bit at a time over more than two decades.

via Cool Spaces: Building a barn into a home | Detroit Free Press | freep.com.

Apartment Therapy is featuring a post on a lovely remodel – here’s a taste.

During the renovation I scoured Craigslist to find a clawfoot tub, an old farmhouse sink and pedestal sinks, and went to salvage stores for doors and door knobs. I took a carpentry class to learn to build furniture and made most of ours, from our kitchen table to living room floor-to-ceiling bookcase. Our house has become an incredible home, a place to share meals and stories.

Elvis & Kresse turned their shell of an apartment into a reuse marvel. This article snippet is from 2011 but the pictures and the ideas are still newsworthy. They went on to create a shop. In these belt-tightening times, it always helps to shop around to get the best deal.But one couple have taken that philosophy to the extreme by completely transforming their home simply with reclaimed goods.Kresse Wesling and James Henrit bought their two-bedroom flat last year when it was little more than a shell. via The austerity house: Couple completely make over their home with reclaimed goods | Mail Online.

This is a resource filled article on how to participate in home renovation waste diversion.

If you’ve ever watched one of the many home renovation shows on television, then you’re familiar with one of the most exciting aspects of those programs – the moment when the sledge hammers come out to demolish the area to be renovated. There’s clearly something very therapeutic about this process as it is the first physical step in a significant house project.

Sometimes the cameras even show the destroyed pieces being tossed into a large dumpster outside the home. What they never show, however, is what happens to that construction waste from there.

Don’t miss it via How to Recycle and Upcycle Waste from Home Renovation Projects.