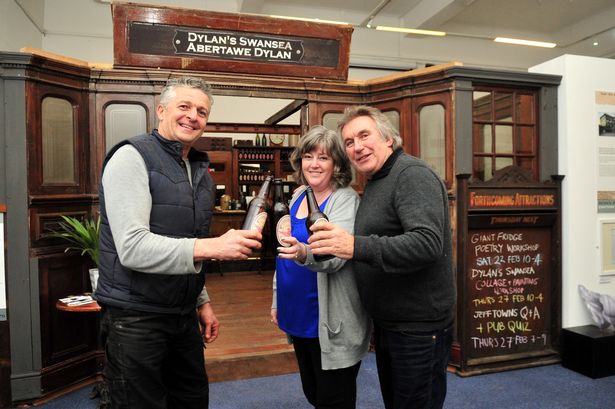 The bar at the exhibition at Swansea Museum, with creator Rhys Stephens, Glenda Thomas and Jeff Towns.

Author and Dylan Thomas expert Jeff Towns, who wrote book A Pearl of Great Price detailing the year-long fling, said: “It is great to see this bar lives on. It was really well put together and was a huge success in the museum. “It is fantastic too that it has found a home in an area with a connection with Dylan; he and Pearl enjoyed a river cruise along this part of The Thames, so it is perfect piece of synchronicity.

Source: A Dylan Thomas snug has been rebuilt in a London pub – close to where the poet romanced his mistress – Wales Online 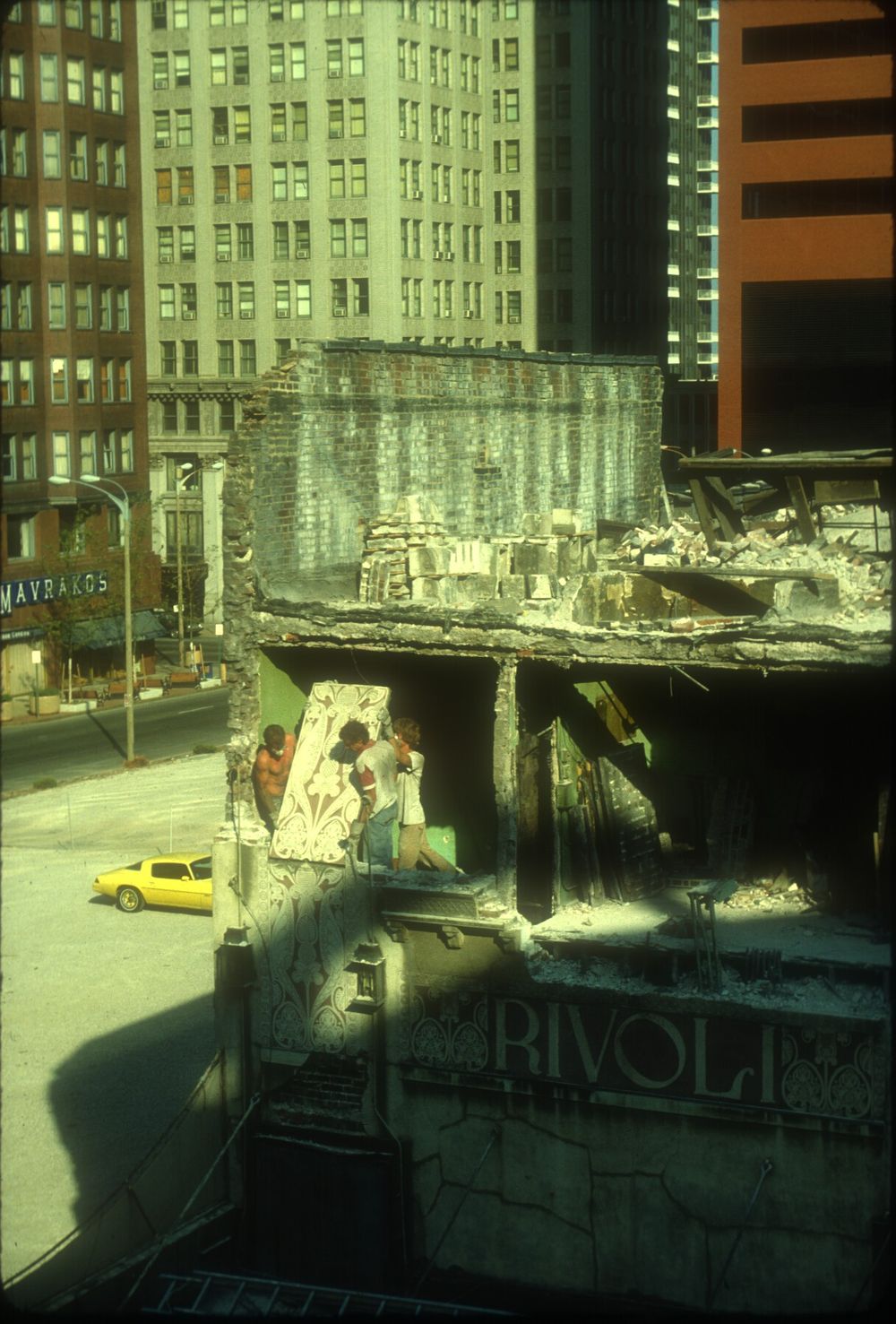 “I just love old buildings,” Giles said. “It’s a big collection, without a doubt, the largest that I’m aware of, and the idea was to develop it as a comprehensive study collection. The idea has grown into a collection of pieces from all over the country. The history here is a national history.”

Source: A salvager’s decades-long dream to build a museum of architectural artifacts – Curbed The Salina Turda Salt Mines of Romania have been converted to the world’s largest salt mining museum, but this is no dry historical tour – there’s weird wooden architecture, a playground and even a ferris wheel. The exhibits rotate, however, between temporary pieces and a permanent collection featuring some seriously unique and one-off objects. The latter includes the shoe infamously thrown at President George W. Bush during a televised 2008 press conference. Using the existing vessel-shaped space of a six-decades-old dry dock, the Danish National Maritime Museum in Helsingor, Denmark takes visitors on a unique subterranean tour of the areas used to build, maintain and repair ships. 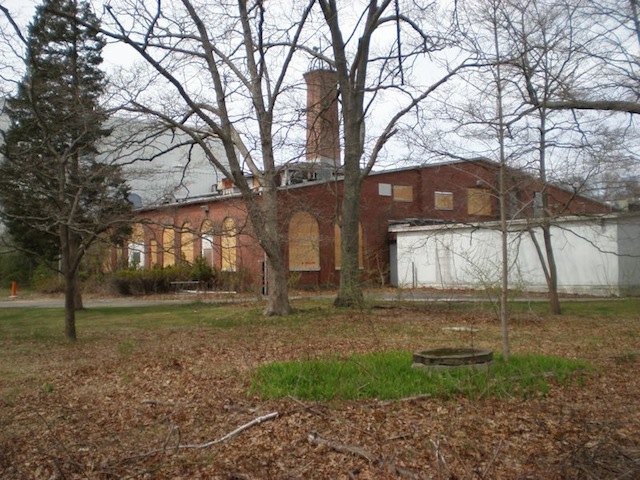 On Friday, a group known as the Tesla Science Center at Wardenclyffe, formerly known as Friends of Science East, purchased 16 acres on eastern Long Island to create a Tesla museum and science center. Matt Inman, creator of the Web cartoon The Oatmeal, encouraged his readers to contribute to the non-profit’s purchase, calling its goal, “a simple feat… only expensive.” Inman set out to raise $850,000, but ended up raising close to $1.4 million for the establishment of what will be America’s first museum dedicated to scientist Nikola Tesla.

The New York Times reports that Inman’s fundraiser saw donations from residents of over 100 different countries. Inman donated the proceeds of the fundraiser to the nonprofit, which purchased the Long Island property from the Agfa Corporation. The corporation used the land from 1969 to 1992, but decided to put it up for sale in 2009.

Ars noted at the beginning of Inman’s fundraiser in August that Wardenclyffe, as Tesla called his estate, was originally intended to be, “a vector for trans-Atlantic wireless communications, broadcasting, and wireless power. The site consisted of an (incomplete) 18-story-high transmission tower that topped off a laboratory surrounded by 16 acres of land in Shoreham, Long Island in 1903. By 1917, Tesla had sold the site for $20,000 to pay bills at the Waldorf. That same year, the transmission tower was blown up by the buyers and sold for scrap.”

Now that papers have been signed for the purchase of Wardenclyffe, the ruins of Tesla’s brilliant scientific career will be dusted off and presented to people who’ve admired the scientist’s work for decades.

via With The Oatmeal’s help, nonprofit buys property to build a Tesla Museum | Ars Technica.

IT is not often you enter a shop and find a mannequin with an Osama bin Laden mask wearing a bridal gown.

Especially when, from the outside at least, South Lismore’s Recycled Building Materials shop looks like any old warehouse.

But there’s nothing usual about the inside. It’s a museum of the different and the strange.

The shop has been assembled in an artistic way, following an emotional train of thought rather than a logical one.

Nimbin’s Peter Robertson has been in charge of the family business for seven years, helped by his children Luka, 24, Jack, 22, and Rookie, 19.

A single dad for 17 years, and deaf until a cochlear implant changed his life seven years ago, Peter said it was a conscious decision to style the shop as a museum.

“It was always about making it fun and interesting, but we never thought we were going to get such a strong reaction from customers,” he said.

Asked which object had the most interesting story and Mr Robertson pointed to a grand piano.

“It is nearly 200 years old,” he said. “It’s a John Broadwood and Sons made in London. Canberra University may buy it. The piano that was built before this one was apparently given to Beethoven.

“It was brought to Sydney from the UK in 1937. We got it from a local lady who stored it for years.”

There are more enigmatic stories in the shop: “There is one demolisher, he sees an old lady with white hair every time he comes here. He wasn’t drunk but kept asking me whether I could see her.”

“He came back a couple of weeks ago and he said that she’s still here,” Mr Robertson said.

Sadly, the lease on the shop runs out on June 16 and is not being renewed by the building’s owner, meaning it is now in its final weeks.

Mr Robertson said the thousands of antique and second -hand objects would be sold online.