Zinski said her organization is concerned that the windows may be sold to an antique dealer or architectural salvage dealer for re-use in a house or business. The purchasers may not realize they are in possession of stolen property.

Above, ‘The Igloo,’ by Cory Bonnett, whose exhibit, ‘Visions of Pittsburgh,’ will be on display this month at Shehady Gallery in the Strip District.

Working exclusively with reclaimed and salvaged raw materials, he transforms hardwood doors, stainless steel panels and fallen trees into works of art, bringing creative reuse and sustainability to his projects. One example in the show is a piece he created on a steel panel salvaged from the demolished Civic Arena.

Source: Artist creates ‘Visions of Pittsburgh’ with material connection to its past | TribLIVE

In a town where desanctified churches morph into breweries and dusty factories are reborn as swanky apartments, repurposing stuff has been elevated to an art form. Pittsburgh has salvage skill. 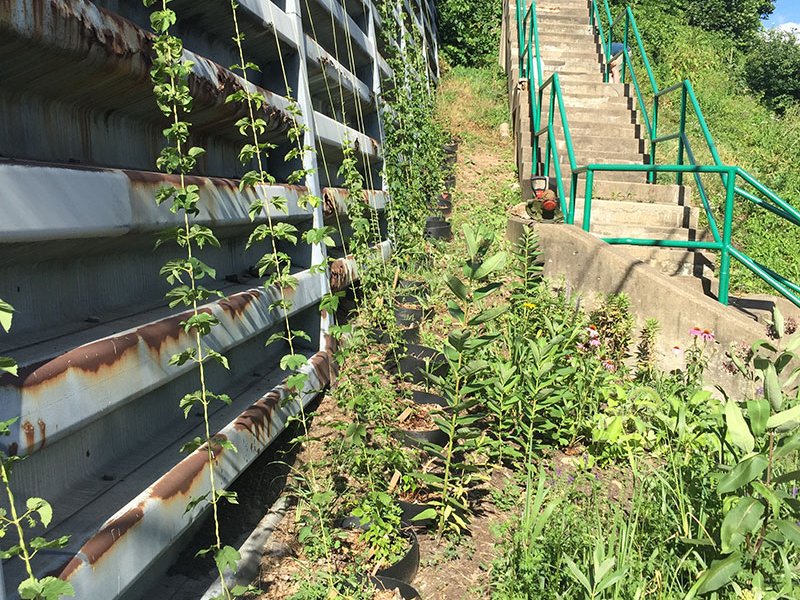 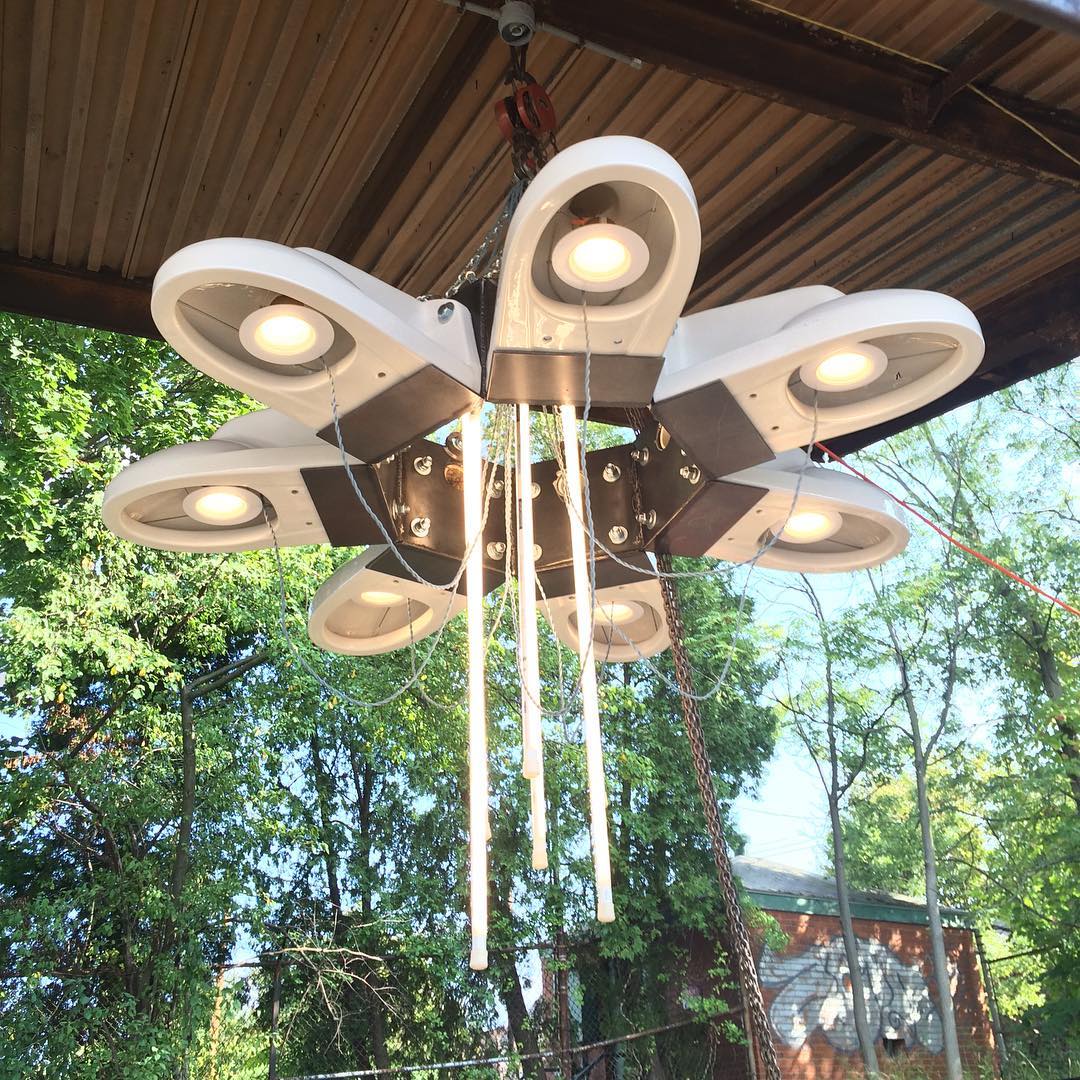 Well it was a truly amazing Saturday at Construction Junction in Pittsburgh. To contribute my ideas and vision and energies in the arena of creative repurposing or applied deconstruction was an honor.

A closeup view of the maple top of a bar that Dave Matline and Dave Baldonieri made from an old bowling alley. It was a special award winner in the Reuse Inspiration Contest.

Knowing that Mr. Baldonieri had once used bowling alley wood to make a work bench, Mr. Matlin was delighted to find pieces of maple lanes for sale at Construction Junction, a nonprofit retailer of salvaged and surplus building materials in Point Breeze. But none were quite right for the project. Then he discovered more damaged sections on the loading dock — for free! “We started hacking and whacking,” Mr. Matlin said. “It worked out better than I thought it would.”

Source: This bar may not be art, but it is an inspiring reuse | Pittsburgh Post-Gazette 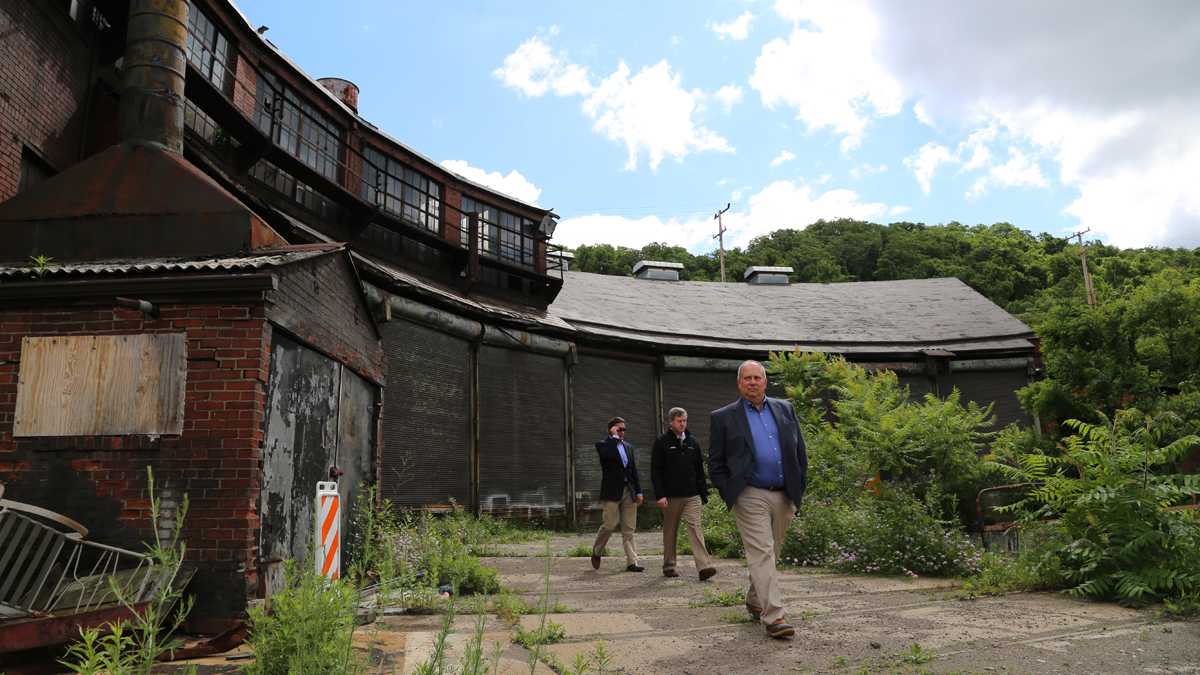 Ronald Robertson and Richard Prescott of East Liberty made a wall hanging from antique tin ceiling tiles after stripping several layers of paint. They change the colored strip with the seasons.

After stripping off several layers of paint to reveal a gray patina with black, silver and rust tones, they attached them to a poplar frame to create a striking 10- by 6-foot piece of wall art for their dining room. To keep it fresh, they added a strip of wood whose color changes with the seasons.

via Contest winners prove anything can be reused | Pittsburgh Post-Gazette.

Inside, the units are light and bright thanks to banks of new windows. When stones were removed to create window openings, they were reused in the courtyard.

The wood floors are another reclamation story. About 30 percent of the original flooring was salvaged and reused.

“We salvaged another 30 percent from the buildings that were torn down to make way for the Tower at PNC Plaza Downtown,” the developer said. “The final third is bowling alley flooring from West Virginia.”

The bowling alley — 2 inches of solid maple — was used in two units and all of the hallways. “They don’t even make bowling alleys like that anymore.” 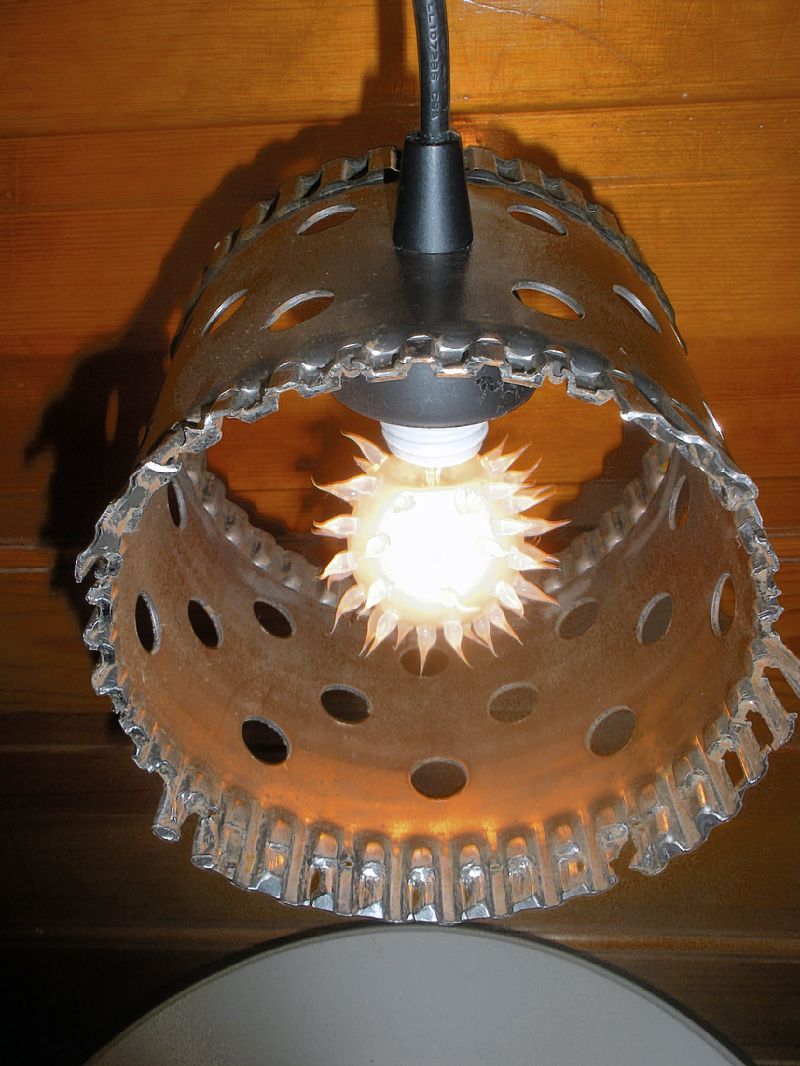 Iris Ramos created a lamp from an unknown piece of machinery. She calls it Dr. “Frankenstein’s Laboratory Light.”

In the art category, the winners were Iris Ramos of Homestead for “Dr. Frankenstein’s Laboratory Light”; Cory Bonnet of Ohio Township, who paints Pittsburgh scenes on old oak doors; Jane Freund of Forest Hills for pottery incorporating shards of glass and ceramic; and Scott Allman of O’Hara for knives made from lawn mower blades.

via Reuse Inspiration Contest proves everything old is new again when creative types get to work – Pittsburgh Post-Gazette.

This four-hour event is a relatively simple concept — you pull up your vehicle with all of your stuff, volunteers unload and sort it among the nine organizations. You don’t even have to sort! And off you go after completing a very short form.

The first event in 2012 drew nearly 200 carloads and generated a lot of donations including:

30 bikes for Free Ride Pittsburgh plus assorted parts and tools

Over 400 reusable tote bags for the region’s food pantries

“All you need is a dedicated person at the URA who works on sustainability issues,” he told me.

That Urban Redevelopment Authority employee would help developers — probably mostly small developers — identify state and federal grants and incentives that would allow them to build green.

That’s the missing link — the coordination, Peduto said. That’s what keeps most small developers from taking advantage of programs that pay for green performance.

Plus, there would be a fund balance to help with financing, which might come from local foundations, Peduto imagines.

The Pittsburgh city councilman proposed this CleanTech Investment Fund as part of his 100 days/100 policies to change Pittsburgh blitz.

In an earlier installment, #48, Peduto proposed developing energy benchmarks for all city buildings.

“Then the city should start working with partners in the nonprofit and private sectors to pioneer a comprehensive program to drive down energy usage and drive up property values across the city,” he said.

Spread throughout the festival is a series called “3Rs: The Art of Reuse, Recycle and Repurpose,” for which eight artists created recycling centers that also stand as art installations. One artist created a garden from discarded plastic laundry detergent containers.