The Washington State Department of Ecology (DOE) has finalized their vessel deconstruction general permit, which allows businesses and boat owners to deconstruct older vessels that are still in the water.

via Ships can now be dismantled on the water | The Northern Light.

“On top of this irreparable damage, we also face massive loss of marine life,” says Matin. “Fish are often seen floating up dead in the surrounding sea, and fresh water around the coastal areas of Sitakunda contains many toxic chemicals.”

Formalised in 2006, the industry had by 2012 allowed Bangladesh to recover an estimated 1.5 million tonnes of steel. At the same time, according to the study, thousands of tonnes of toxic substances such as asbestos, lead, waste oil and other chemicals were discharged into the soil and sea. The teams on site will have only one chance to flip the ship upright. If it goes wrong, the backup plan is to break up the ship where it lies, at a huge cost to the local environment. via It’s Almost Time To Flip The Shipwrecked Costa Concordia — Here’s How The Complex Plan Will Go Down – SFGate. 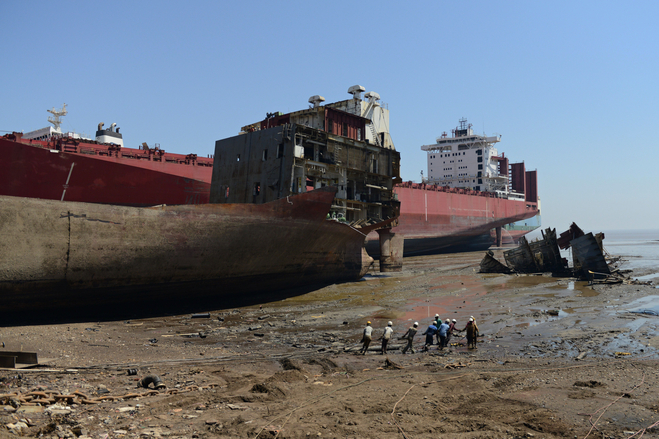 The infamous oil tanker Exxon Valdez is almost completely gone, most of it having already been recycled in Indias voracious steel mills. But its dismantling on a beach in India has once again highlighted the dangers, both environmental and physical, associated with the booming ship-breaking industry.

In about two more weeks, there will be nothing left of the former oil tanker, which in 1989 was responsible for the largest oil spill ever in the United States, leaking more than 41 million liters (10.8 million gallons) of crude oil into Alaska’s Prince William Sound. After the accident, the Exxon Valdez was converted into an ore carrier, and it was most recently renamed the Oriental N. Priya Blue, an Indian scrapping and salvage company, bought the freighter last spring for $16 million (€11.9 million), solely for the purpose of scrapping it.

On Aug. 2, the ship was grounded at high tide on the beach at Alang. There, at the world’s largest graveyard for ships, more than 300 workers are being paid a few rupees a day to dismantle the vessel.

There was a great outcry when it was revealed that Alang was to be the notorious ship’s final resting place. Although it does not contain more toxic materials than other ships, environmentalists took advantage of the former tanker’s prominence to file a lawsuit at India’s Supreme Court to block its import. It was unsuccessful.

But the trial brought to light, once again, the catastrophic conditions at many low-wage shipyards in South Asia, where old ships are being scrapped and gutted. In October, six workers died in a fire in Alang as they were dismantling the oil tanker Union Brave on the beach. One of the workers had struck a pipe with his blowtorch that still contained oil.

In Pakistan, more than 20 shipyard workers died and more than 150 were injured in 2011. And in Alang alone, 173 workers have died in more than 170 shipyards since 2001, killed by falling steel parts or burned to death in explosions. Workers are sometimes barefoot as they climb over the ships, and toxic waste is often incinerated on the beach.

“Every year, more European end-of-life ships containing hazardous materials are sent to India, Bangladesh and Pakistan. Such practices are unacceptable and Europe is in the driver’s seat to put a stop to this on-going human rights and environmental disaster,” comments Patrizia Heidegger, Executive Director of the NGO Shipbreaking Platform. “Only a financial mechanism enforced in EU ports can properly internalize costs and close loopholes, which have allowed ships until now to escape legislation and accountability.”

via RECYCLINGPORTAL – Green Ship Recycling: New study argues for an incentive for shipowners. END_OF_DOCUMENT_TOKEN_TO_BE_REPLACED

Conservation groups argue that the ghost ships should instead be recycled at a ship-breaking facility. Concerns about the long-lasting effects of toxic pollutants onboard the ships spurred a lawsuit by those groups to force the Environmental Protection Agency to better catalog and regulate Sinkex. The case, filed in U.S. District Court in San Francisco, is ongoing.

PEARL HARBOR, Hawaii—The U.S. Navy is resuming its practice of using old warships for target practice and sinking them in U.S. coastal waters after a nearly two-year moratorium spurred by environmental and cost concerns.

Later this month, three inactive vessels—Kilauea, Niagara Falls and Concord—will be sent to a watery grave off Hawaii by torpedoes, bombs and other ordnance during the Rim of the Pacific naval exercises, or RIMPAC.

The military quietly lifted the moratorium on Sinkex, short for sinking exercise, last year after a review of the requirements, costs, benefits and environmental impacts of the program, the Navy said in a statement to The Associated Press.

It will be the first time since 2010 the Navy has used target practice to dispose of an old ship. Previous targets have ranged from small vessels to aircraft carriers such as the USS America, which was more than three football fields long.

A large freighter that has been beached is being broken up for recycling. Its steel body lies split open, exposed to the elements.

A huge chunk of steel is being worked on. The workers, scurrying around barefoot, haul heavy chunks of metal on their backs and in their bare hands.

The shoaling beach extends more than 10 kilometers and is located some 30 km north of Chittagong, the second largest city in Bangladesh.

More than 100 sites are set up as yards to demolish large vessels.

Decommissioned ships are run aground and then hauled to the beach with ropes, much as slaves in ancient Egypt moved huge stone blocks to build the pyramids.

The method is called “beaching.”

The surface of the nearby Bay of Bengal is awash with fuel oil. Parts of the beach are thick with oil, and workers, if they don’t watch their step, can sink in the sand up to their knees.

It is estimated that 70 percent of all big ships decommissioned in the world are demolished in either Bangladesh, India or Pakistan.

Ship breaking has been roundly criticized since around 2000 for the damage it causes to the environment, and the lack of safety provisions for workers–who are paid a pittance for putting in 11-hour days of strenuous, dirty and dangerous work.

At the site near Chittagong, Mohammed Jamal Uddin climbed to the deck of a decommissioned vessel and lamented: “My wage is 25 taka (about 25 yen, or 30 U.S. cents) an hour. I work 11 hours a day. So I can get only 300 taka at most, including overtime money.”

Asked why he chose this line of work, the 42-year-old replied: “I have no choice. We have no (other) jobs because there are too many people in Bangladesh.”

Read the entire article via RIO+20: In South Asia, it is survival that counts … not the environment – AJW by The Asahi Shimbun.