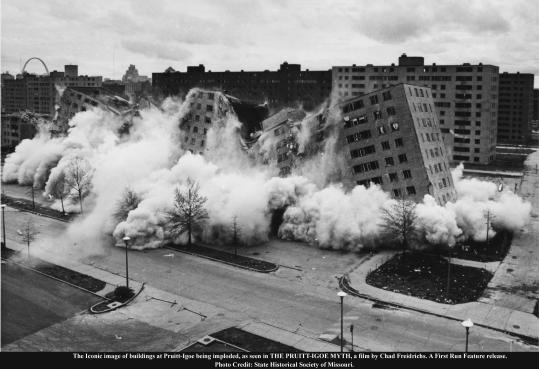 So that’s the “Pruitt-Igoe” part of the documentary’s title. Where does “myth” come in? Presumably, it refers to the inevitability of the project’s failure. Yet the very things Freidrichs brings in as context (and indictment) — racism, suburbanization, inadequate funding for the project, the loss of urban manufacturing jobs — make plain what a burden the project suffered under. Add in the Modernist design commandment that high-density tower blocks in low-density settings were the best way to house people, and you had a prescription for disaster.

Pruitt-Igoe was the first, and most famous, example of the failure of that sort of public housing. But it was by no means alone. The since-demolished Cabrini-Green project in Chicago became, if anything, more notorious. And that’s not taking into account a factor specific to St. Louis. The city saw its population decline by 50 percent — that’s right, 50 percent — between 1950 and 1980, a more severe decline than almost any other US city. Shrinking cities have numerous needs. Housing, let alone the wrong sort of housing, is not one of them. Under a different set of circumstances — in a different society — the development might have flourished. But “The Pruitt-Igoe Myth” is a documentary, not fantasy.

Mark Feeney can be reached at mfeeney@globe.com.