Hundreds of support beams that held up the temporary bridge carrying Interstate 5 traffic over the Willamette River from 2004 to last year are finding new life in other public works projects around the state. 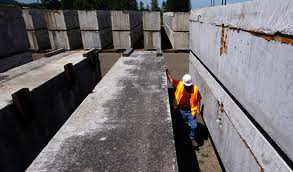 The state Department of Transportation dismantled the temporary bridge last year after the new permanent span opened immediately to the west. The state salvaged about 320 of the huge concrete and steel beams, and most have now been used in or reserved for other bridges or similar work, the agency said.

The beams are colossal. 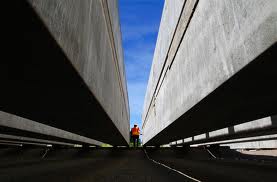 They range from 90 to 115 feet long, are 4 feet high and 4 feet wide, and weigh up to 113,000 pounds apiece, said Karl Wieseke, the Transportation Department’s construction project manager for the Willamette River bridge replacement.

The beams consist of a steel framework covered in concrete. They were made by Knife River Corp.’s Precast/Prestressed Division in Harrisburg,Wieseke said.

The beams sat horizontally on the bridge, supporting its deck, and were held up by big pillars spaced every 100 feet or so.

The state will use about 50 of the beams to build a bicycle and pedestrian bridge and path between Eugene and Glenwood that will run on the south bank of the Willamette underneath the new I-5 bridge. That work is set to start next near and be completed in 2014, Wieseke said.

The agency is using about 100 beams for other state projects, and 104 have been or will be sold to other govern­ment entities for public works projects, the department said.

The department sold only four beams to the private sector.

They went to a group of homeowners who live on an island in the McKenzie River east of Blue River.

The island’s sole link to the mainland was a private iron-and-wood bridge that was built in the 1930s, islandresident Darrell Roberts said.

The bridge was owned bythe island’s occupants and had deteriorated to the point it was dangerous to drive on, Roberts said.

The Transportation Department, which inspects and regulates publicly accessible bridges statewide, had put a severe weight limit on the bridge, effectively banning everything but cars and light pickup trucks. The department warned homeowners that it would allow only pedestrians effective this July, Roberts said.

The 16 homeowners — mostly absentee owners who have vacation homes on the island — several years ago tried, and failed, to get public funds to build the new bridge. So, the homeowners came up with the necessary $400,000-plus themselves, Roberts said.

“We just needed to do it. We were kind of caught in a corner,” he said.

The bridge was completed in the past few weeks, Roberts said. The four beams are set snug together, side by side, creating a 16-foot-wide surface, he said.

The Transportation Department said it typically charged agencies $2,500 per beam, but Roberts said his group negotiated that price down.

The island residents heard about the beams’ availability from an engineering firm they were working with that was also working on the Willamette River bridge, Roberts said.

The beams have plenty of life left in them, Wieseke said. They’re designed to last 50 years, he said.

The main wear comes from the bouncing effect created by heavy traffic, he said.

The agency has allocated or sold all the used beams, and no more are available, he said.

Most of the materials that went into the temporary bridge were re­cycled in some fashion, Wieseke added.

The steel reinforcement in the pillars was pulled out and recycled as scrap, while much of the concrete in the pillars and other components was crushed and reused, partly on the new bridge, he said.

“We build it right back into the project,” he said.

via Recycled bridge | The state finds new uses for massive beams from its I-5 project.