I have a soft spot for the divinely inspired builders- they make me feel normal. 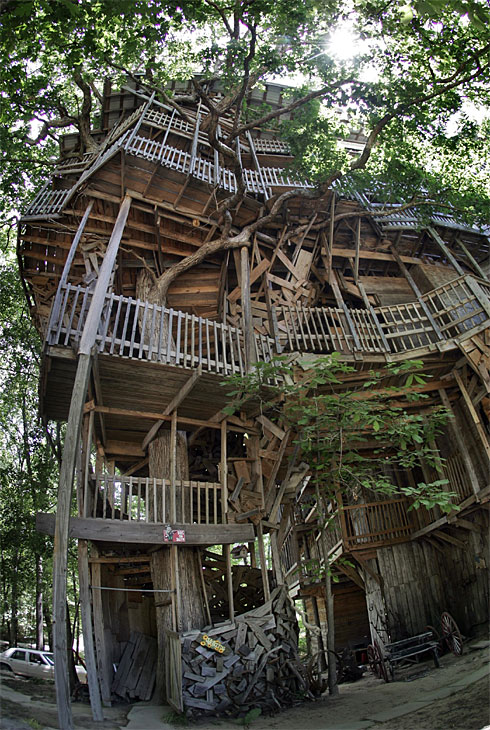 “I built it for everybody. It’s God’s treehouse. He keeps watch over it,” said Burgess, who received his inspiration in a vision that came to him in 1993. “I was praying one day, and the Lord said, ‘If you build me a treehouse, I’ll see you never run out of material.”‘

And thus far, as Burgess sees it, the Lord has provided. Most of his materials are recycled pieces of lumber from garages, storage sheds and barns. Now into his 14th year of construction, he is not finished.

The treehouse has 10 floors, averaging nine to 11 feet in height by Burgess’s reckoning. He has never measured its size but estimates it to be about 8,000 to 10,000 square feet. He did count the nails that he has hammered into the wood — 258,000, give or take a few hundred. And he guesses he has sunk about $12,000 into the project.

“God used my hands to put every piece in place, but I had a lot of help,” said the 56-year-old landscape architect. He’s a country boy but lives in town and compares himself to Job of the Old Testament. His pale blue Paul Newman-like eyes beam and he wears an easy smile on his tanned face.