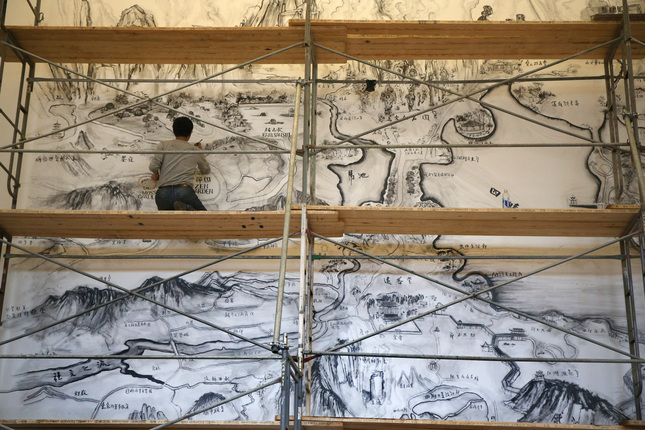 Chinese artist Qiu Zhijie works on the Art Wall which will be part of the inaugural exhibition “Architecture of Life” at the new Berkeley Art Museum & Pacific Film Archive on Center Street in Berkeley, Calif., on Friday, Jan. 22, 2016. BAMPFA will be open on January 31. (Ray Chavez/Bay Area News Group) ( RAY CHAVEZ )

The new BAMPFA design incorporates parts of the old 1939 UC Berkeley printing plant, retaining much of its art déco feel and sawtooth roof line, then adding modern spaces — still with plenty of striking angles, some highlighted in chili-red or slate-gray colors, but designed with function in mind.

City officials are also pleased with the repurposing of the old factory and the reclamation of several pine trees cut from the property — used by local master woodworker Paul Discoe to build shelving and seating in the new building.

“It’s really state-of-the-art reuse, turning a really useless decrepit building into a stellar work of art itself,” said Councilman Kriss Worthington. “(BAMPFA) is going to be a vital, powerful, significant element here, and when people see what a phenomenal success this is going to be, I expect to see even more arts groups are going to be part of this synergy.”