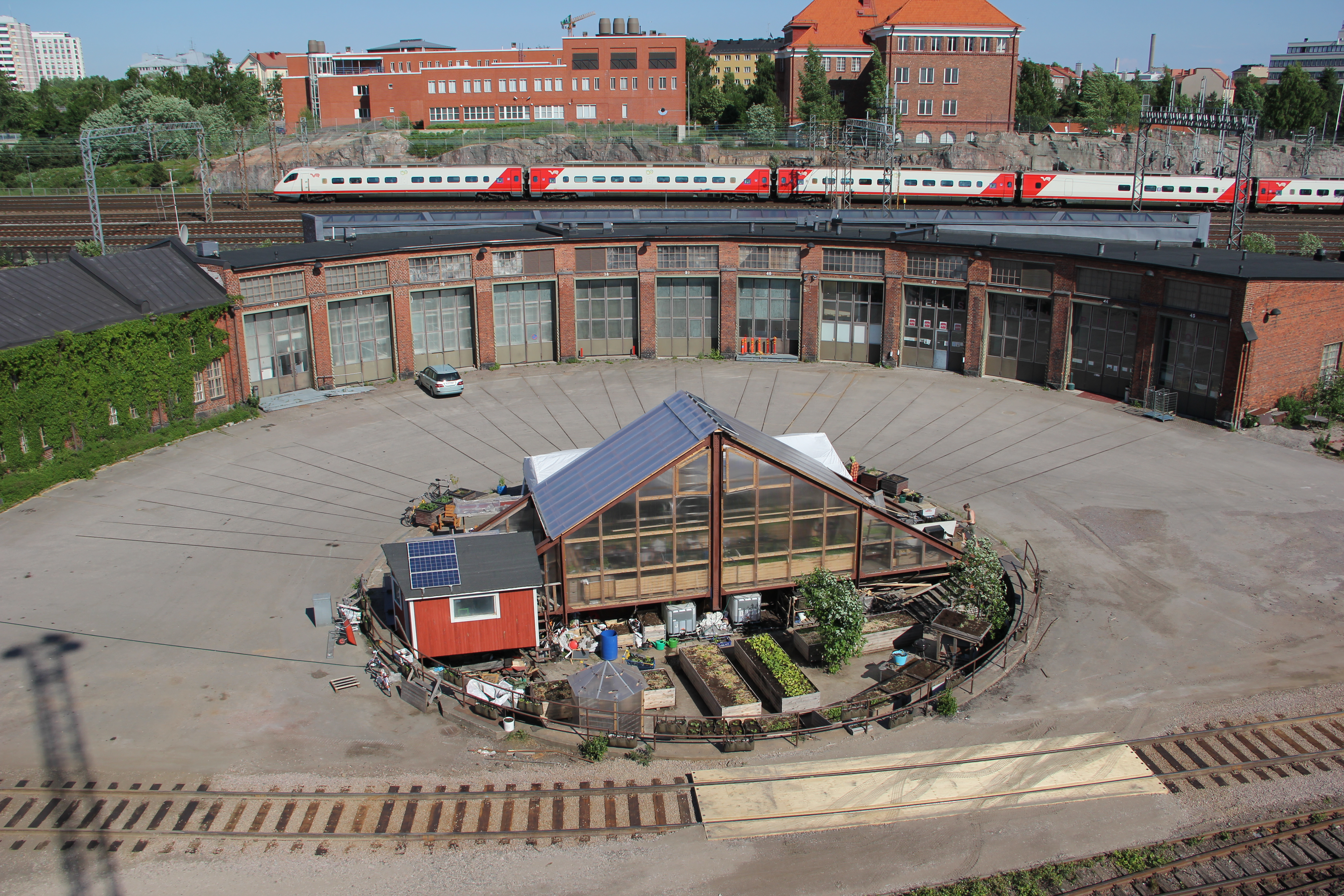 In 2009, Kääntöpöytä, finnish for “turntable”, opened in Helsinki, Finland tucked between modern highly trafficked railways by local environmental organization, Dodo Ry. The greenhouse and café was built into an existing train turntable left unused in this industrial graveyard due to contemporary trains and stations. The historic steel structure serves as the framework for the thriving greenhouse made of wood sourced locally from Finland and western Russia. True to the passive solar design the walls are made from long-lasting UV protected polycarbonate. Designed by Joseph Mulcahy, the greenhouse was built by the highly involved staff and volunteers under the guidance of a few skilled craftsmen from Lapland.

Kääntöpöytä is full of recycled pallet planter boxes that grow a multitude of veggies and fruits in the warmer months. Kirmo Kivela, a long-time guerilla gardener in Helsinki and project leader, says the green house has extended the very short growing season of this northern city. Walking into the greenhouse on a brisk March day I noticed the surprising warmth achieved through quality craftsmanship and resonating from the Biolan composter at the entrance. 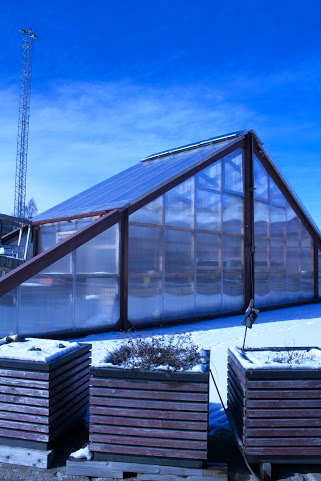 From May through October Kääntöpöytä provides Helsinki residents with brunches, lunches and vibrant live entertainment. A local chef uses the onsite brick oven and cultivated produce to create delicious Nordic dishes. Under the northern summer sun, guests sit on charming benches and chairs surrounding the greenhouse made from reclaimed doors and wood sourced from a local renovation site.

Kääntöpöytä sports a dry toilet for customer use and compost research with Finland’s Dry Toilet Association. Additionally, the café hosts sustainability workshops about composting, beekeeping, pallet planter box making and other do-it-yourself projects. The lively café, or “kahvila” in finnish, adds some much needed pizzazz to the neighborhood for the many artists who rent studios in the nearby old train industry buildings. 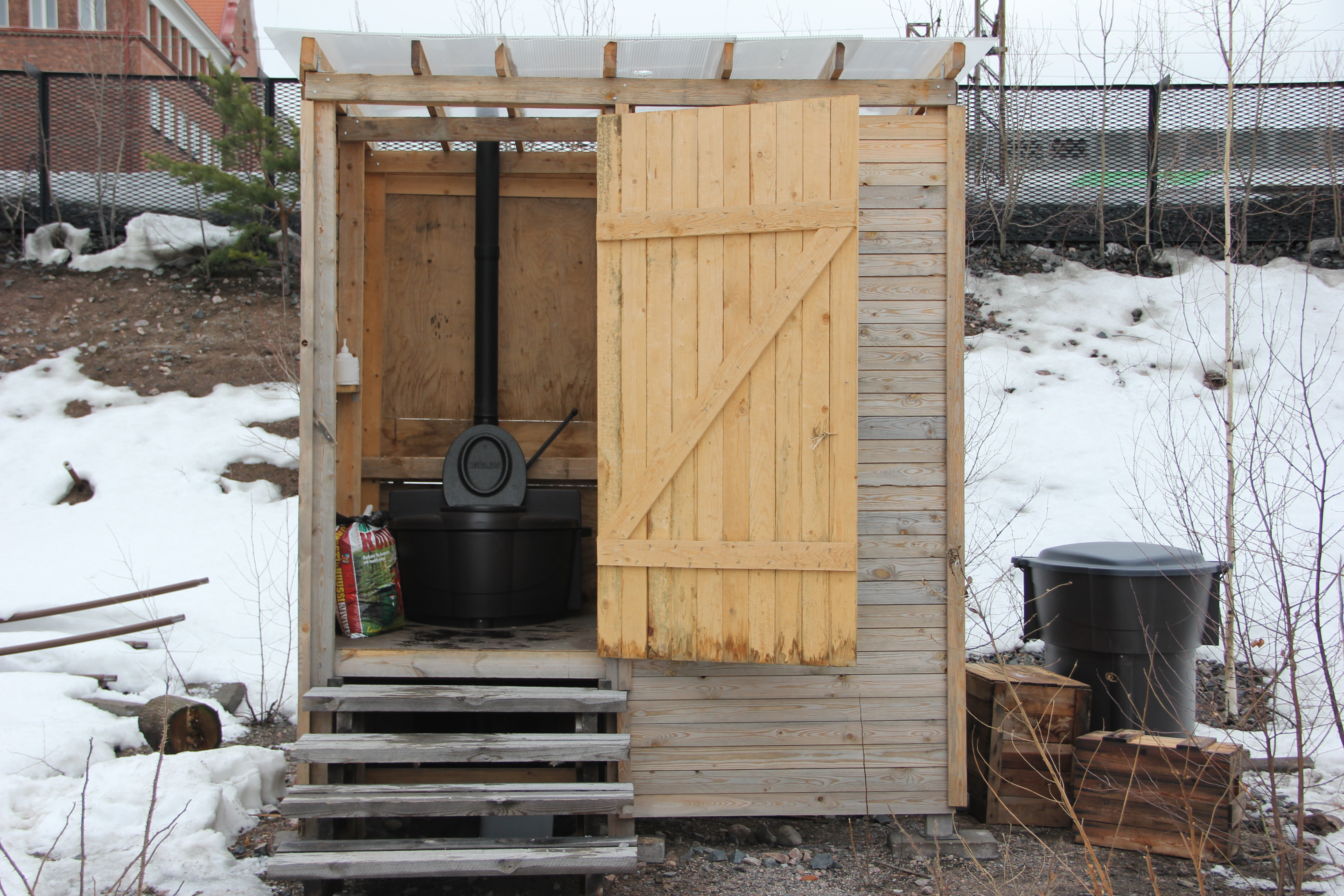 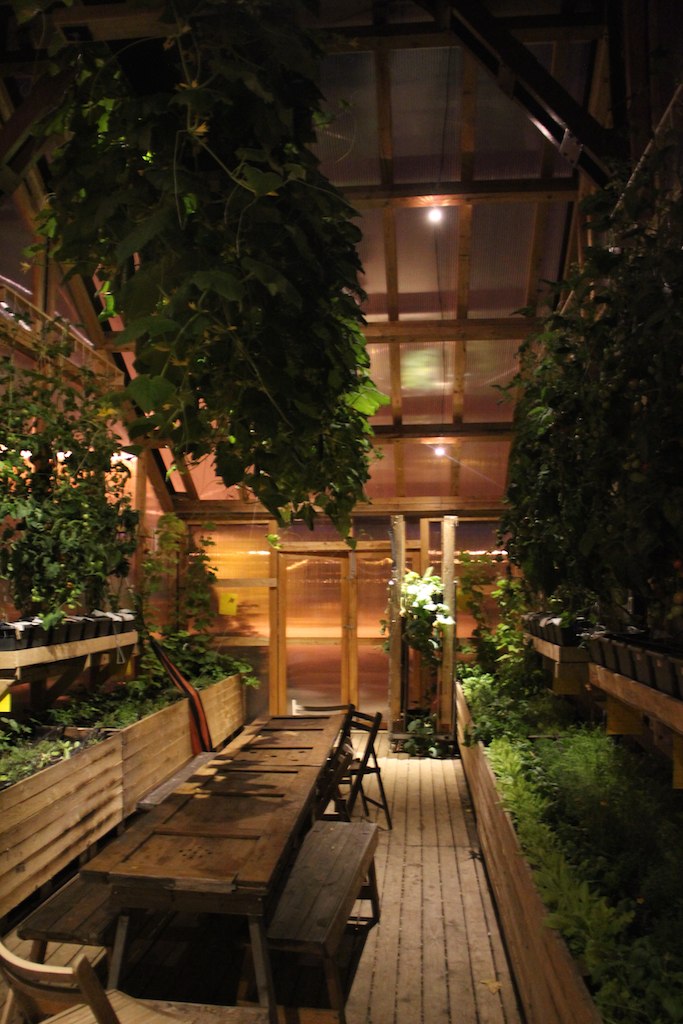 A World Design Capital grant from the city and supportive companies including composting pioneer Biolan provided funding for the project. The land is leased to these innovative activists from the State at a reasonable rate to assist their cause.

The effects of this repurposed space are apparent at the well-attended events in the summer time. The beauty this inventive building adds to Pasila’s underground alongside graffiti covered retired train cars is a powerful testament to what we can do with our outdated industrial lands as modern technology continues to develop. 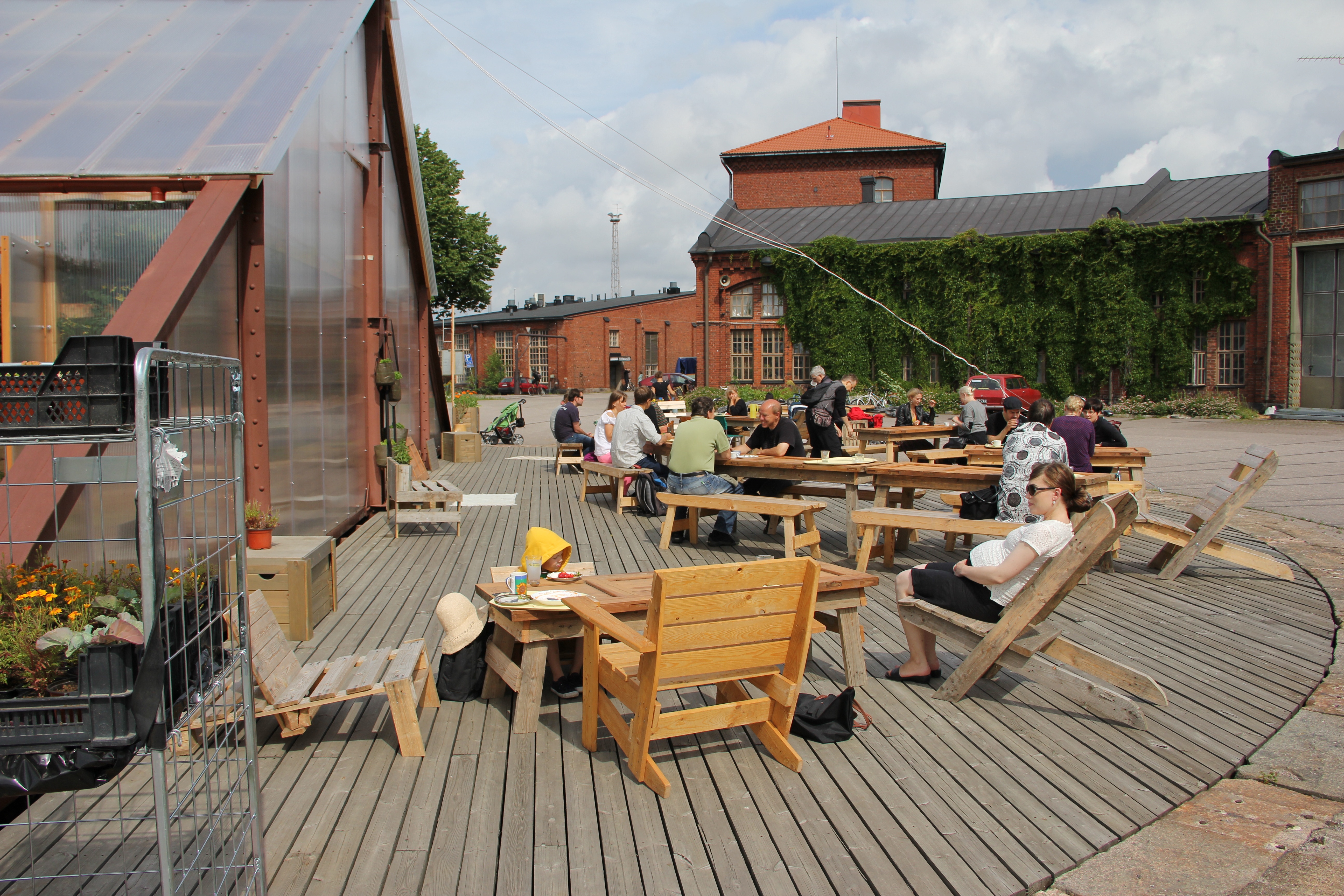 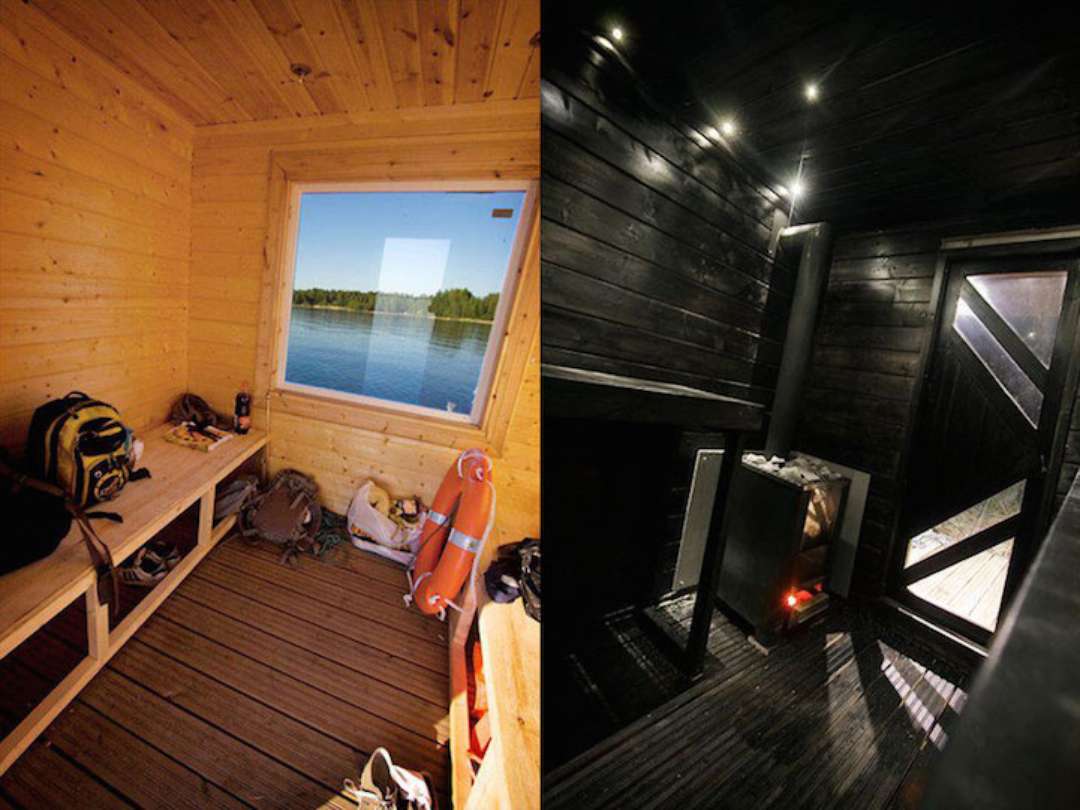 Built out of recycled wood, the buoyant steam bath features a rooftop observation deck, a barbecue, and a hammock, making it the perfect place to unwind on the water with friends, whether in winter or the warmer summer months. The timber material reflects the same palette used in traditional saunas, adding a touch of warmth. A set of repurposed plastic drums keeps the sauna afloat, while a small outboard motor is used to power the vessel, showing the group’s do-it-yourself sensibilities. 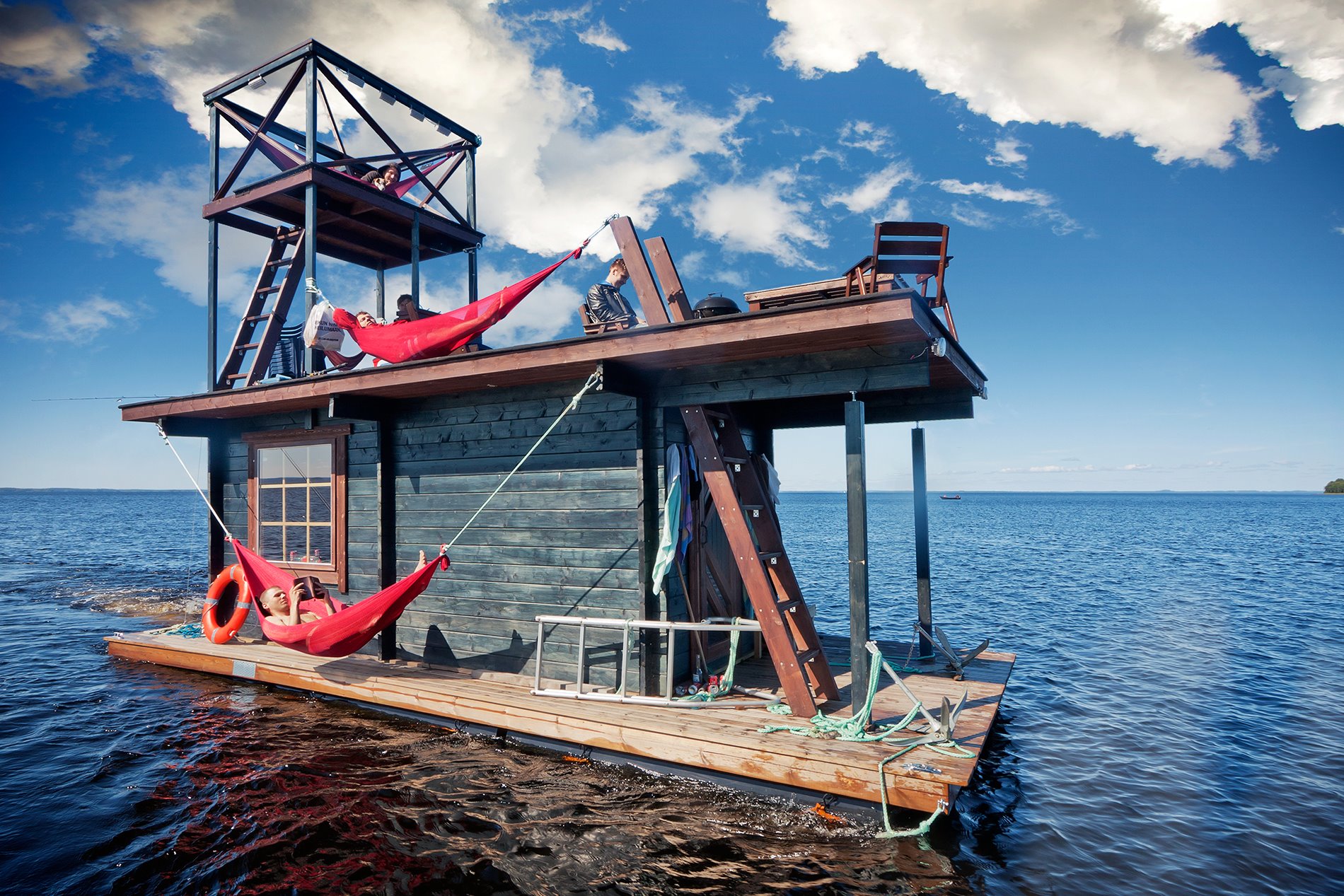 via Steam Boat: Sweat it Out on Finland’s Floating Sauna – Architizer.

We are super excited to have Michaela interning at the RA!

Here at the RA we have a strong ethic of volunteerism, and we are happy that others do too.   Our internships are educational experiences tailored to the interests and goals of our participants, and of course our readers!  We are always thrilled when people step up to participate.

This spring we are super excited to have Michaela join us in creating new content by writing articles and updating resources. 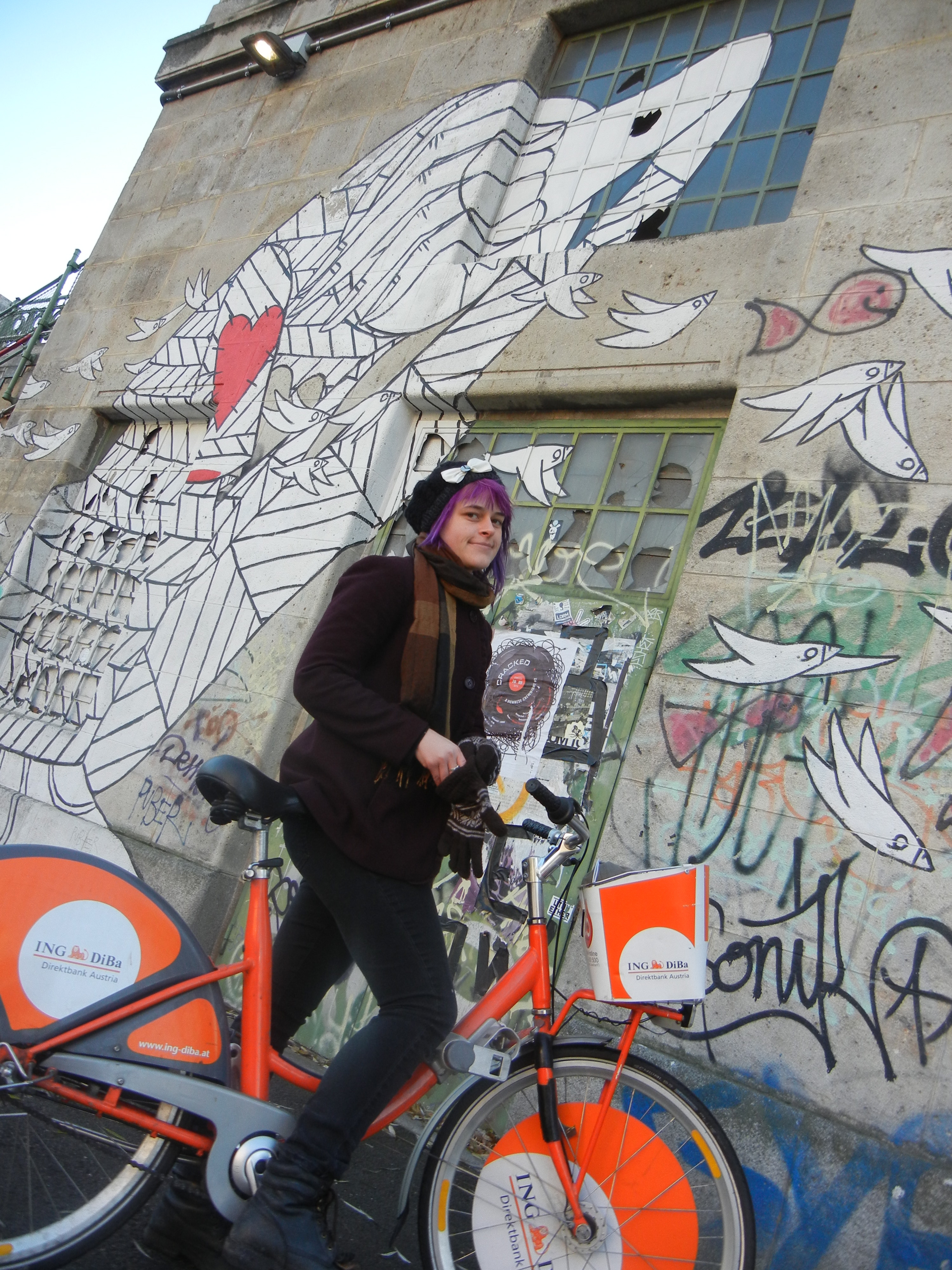 Michaela is a student at Metropolia University in Helsinki, Finland studying sustainable building engineering. Her interest in innovative building was sparked with an initial project in the Mojave Desert at Aquarius Ranch on a super adobe dome underneath UFOs and starry skies.

She stumbled into the natural building world through working on organic farms and continued on with projects utilizing cob, light-clay straw, adobe, and infinite recycled materials. After working at cafes and arts non-profits to support her wanderlust, she chose to return to the Nordic region to get back to her building passion.

She currently is on work placement with Whole Trees Architecture in her native Wisconsin with one of her architectural heroes, Roald Gundersen. In the future she hopes to creatively develop accessible hybridized building techniques. She believes natural materials, inspiring integrated design, cradle-to-cradle material reuse, and updated vernacular architecture are the future for a sustainable built environment.

When she’s not brainstorming building compositions and calculating structural integrity you’ll find her biking aimlessly, foraging in the forests, enjoying beers at a sauna evening and flipping around with her acrobatics group.

Look for articles by Michaela over the next few months!

The image of a secluded cabin in the woods recalls the simple, idealistic idyll of Henry David Thoreau’s Walden, free of the impositions of society. This beautiful micro-cabin, built beside a lake in Finland, was constructed to go under the radar of Finnish building regulations, which require one to get a permit for anything that is larger than 96 to 128 square feet, depending on the district.

Anticipating a one-year stint in the military, owner Robin Falck decided to design a cabin that wouldn’t require getting tangled in bureaucratic red tape. Built with a 50 square foot loft above for sleeping and storage, and a ground floor lounge/living area and kitchen and bathroom, the house is designed to maximize the allowed area, plus boosting the capacity for great acoustics and natural daylighting. In addition to the tall window, there’s an adjacent deck for a great view of the tranquil surroundings.

On Tiny House Listings, he talks about his cabin, which he has dubbed “Nido” (or “bird’s nest” in Italian):

A couple years back in 2009 I got this idea of an cabin/small house that would be small enough to be built without the need of a permit. In Finland it’s 96-128 sq. ft. (depending on where you are). So I started daydreaming about different possibilities and didn’t really believe that I would one day actually build it.

Well, a year later, suddenly, after almost forgetting the whole idea I got obsessed and set out to actually design it. Probably a combination of the fact that my military service was approaching and after sketching and calculating it seemed so possible.

Winter of 2009/2010 I spent designing and planning the house. I contacted a couple of architects that were really kind to help out with some of the more technical stuff.

Then came summer and the construction began. I had already chosen the place and had it in mind when designing the cabin. On June the 5th I started and 2 weeks later the only thing missing where the window and door which arrived a couple weeks later.

Best of all, Falck says that he was able to find recycled materials for the majority of the construction, and he estimates that the cost was somewhere around US $10,500 plus labour, which isn’t too bad for a photogenic little lakeside shelter such as this. More over at Tiny House Listings.