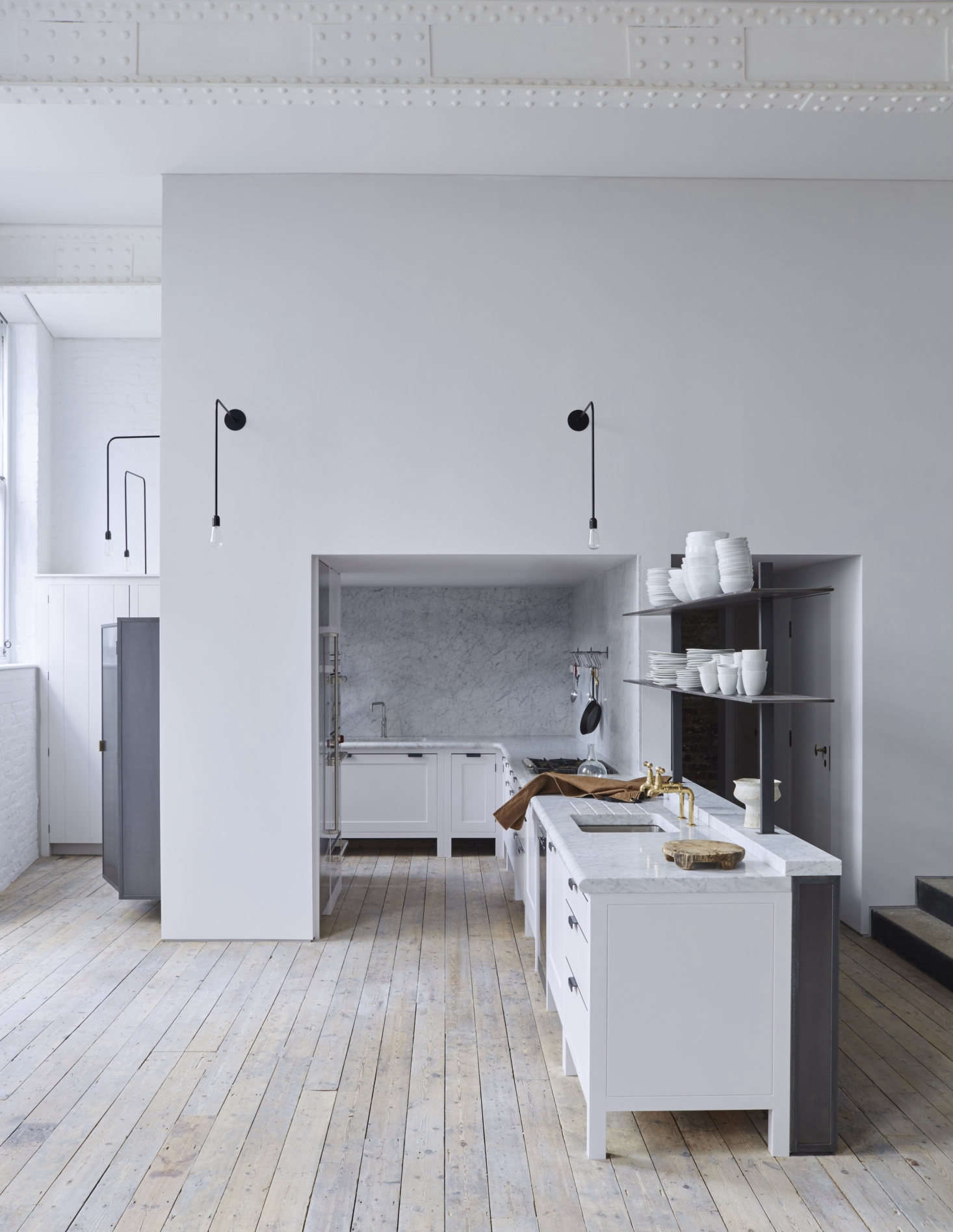 Above: The main work space is flanked by two satellites: a cloakroom and elevator to the right of the stair, and, on the opposite side, an open panty.

The wide-plank flooring is original, newly lightened with a soap and lye finish. The black metal long-armed sconces were designed by the architects.

Paneling was reclaimed by 93ft from a chambers office in Derbyshire. Above, custom lights are designed and manufactured by 93ft, complete with repurposed original light fittings to contrast against the original London stone. Wayfinding light box designed and made by 93ft. 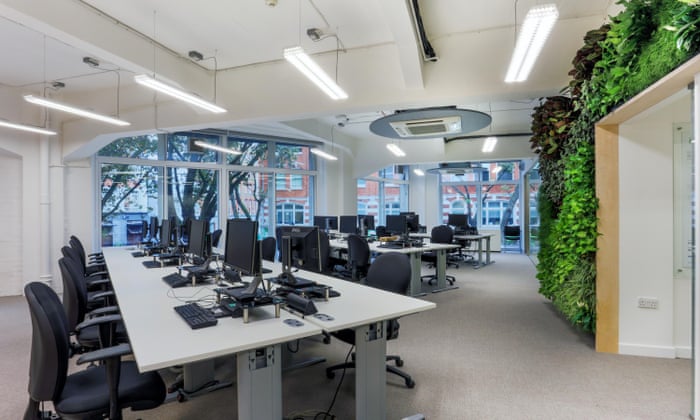 Such measures could bring about a similar shift in mentality within the industry as has been witnessed in relation to health and safety, he argues: “Time is a real pressure when it comes to taking materials down to reuse them, but it’s interesting that time is never an issue for health and safety these days.”

Source: A world without waste: the rise of urban mining | Guardian Sustainable Business | The Guardian 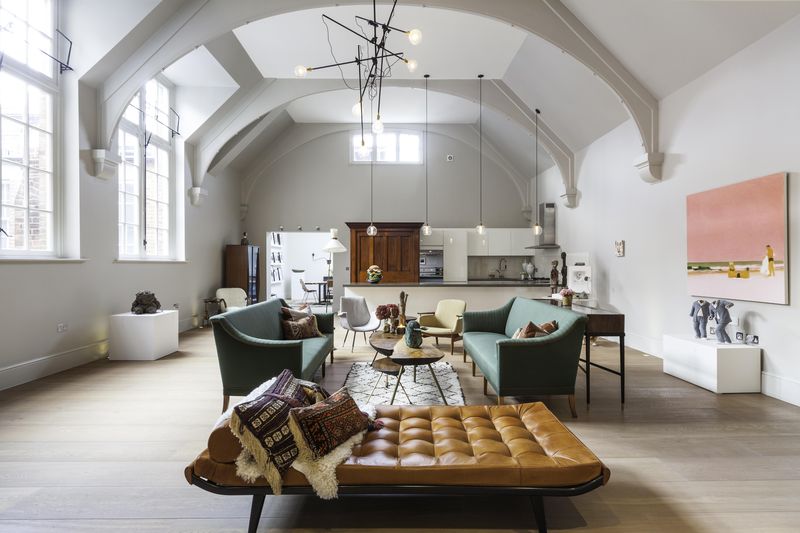 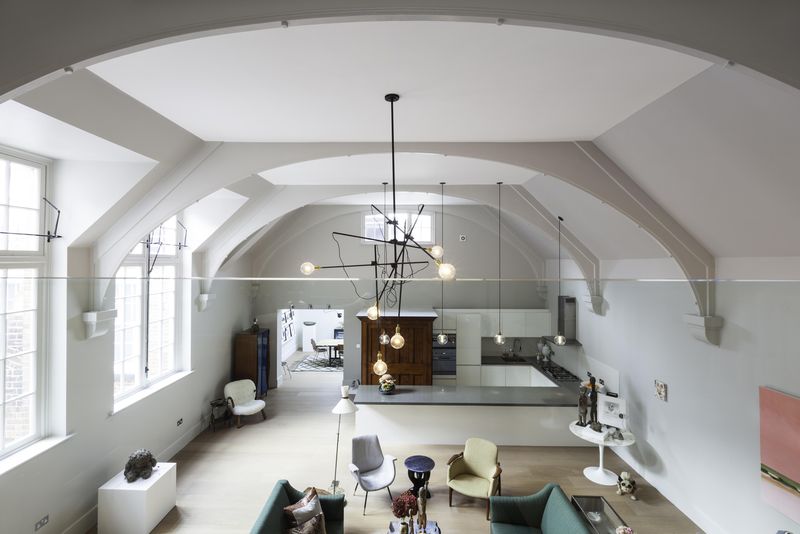 His two-bedroom flat is a showcase of the Berdoulat approach: “What drives us is not purely a conservative nostalgia, but a love of truth and a dedication to the creation of beautiful, unique, well-crafted products,” he writes in the company manifesto, and points out that secondhand shops sell well-made items at prices comparable to Ikea’s.

“Berdoulat is passionate about sash windows and abhors the UPVC replacements, which are slowly but surely ruining many period buildings across the land.” To “help raise awareness about the plight of the native sash,” he designed a Save Our Sashes from Plastic Surgery T-shirt that he sells on his site.

via Out with the New: Reinventing the Past in a London Remodel: Remodelista. The Alchemist pub before it was illegally demolished

“In our view the demolition was a very serious breach of planning rules which can only be put right by the complete rebuilding and reconstruction of this important community asset, using the same materials and to the same architectural design.

“This building was an integral part of the St John’s Hill Grove conservation area and its loss has been keenly felt by local people. That’s why we are determined to take action to ensure it’s restored for future generations.”

The Alchemist pub after being knocked down

via Property developers told to rebuild London pub ‘brick-by-brick’ after illegally knocking it down – Home News – UK – The Independent.

Anyone who considers themself an entrepreneur or innovator in waste prevention, or would like to become one, can find out more and apply at http://www.wrap.org.uk/iwp2.

via Funding available for waste prevention entrepreneurs (From Watford Observer).

U.S. clothing and footwear brand House of Vans has transformed a series of five disused tunnels beneath the streets of London into an indoor skate park!

Artists can rent the studios for free, the skate park is open to public and the musicians performing in the space are asked to donate a percentage of their ticket sales to charity. Interior designers Brinkworth have created a restaurant in central London that resembles a farm building, with rusty corrugated iron on the walls and salvaged lighting (+ slideshow). via London restaurant resembling a ramshackle farm building by Brinkworth. The painting appears to be work of Irony, a well known but anonymous graffiti artist who has produced some stunning work in collaboration with Boe, mainly around north London. ‘Circulus’ is a Latin word defined in English as ‘a social gathering or circle company surrounding an area of interest’ We are Circulus and our interest is entertainment. We want to create and deliver a brand new take on circus arts; drawing on the cutting edge of modern technology, endeavouring to give our audience a unique, visceral, live performance experience.

We are interested in performing in found and forgotten spaces in London, where we are based and around the world. Transforming a space, leaving it exactly as we found it. Coming and going, a finite entity.Our interest does not lie in personal gain, we will always be socially beneficial. Providing the magic of the touring show to areas that have been neglected, areas that may be bereft of the arts. via Loft apartment by Form Design Architecture with reclaimed floorboards.

Beagle is a restaurant in London, England built into railway tunnels. Their site has amazing photos of the adaptive reuse, not to mention the food looks good too!

We are seeing a lot of warehouse adaptive reuse projects lately. Here is a lovely one from South London on Dornob.

Price’s concept was to more or less insert a home into the existing building by dividing the space in half. Since the mezzanine provided a natural separation of the vertical space, that side of the warehouse was naturally to become the living area.

via From Warehouse to Wonderful: Double-Duty London Home | Designs & Ideas on Dornob.

The ReUse centre will provide quality, good value products for the community and will keep money in the local economy.

Minister Durkan hailed the project as a win-win for Derry.

“This facility will keep items out of landfill, assisting Derry’s drive to be a sustainable city. The resultant diversion of 500 tonnes of waste per year from landfill will help recycling and climate change targets.”

He continued: “The estimated £50,000 per year in landfill cost savings can now be invested in more worthwhile activities by the council rather than being buried in the ground.

“The refurbishment of items provides novel opportunities and skills to help our young people find jobs. What I and DOE are about is a better environment and a stronger economy and this will help towards that goal.”

United Kingdom: A London-based ‘social enterprise’ known as The Living Furniture Project has been established to weave together three unlikely elements: designer furniture; reclaimed materials; and a more promising future for the homeless.

The new venture is run by a team comprising some of the capital city’s leading ‘eco-designers’ who are training a group of London’s homeless in the art of upcycling using unwanted furniture or other waste materials reclaimed from the local area.

‘Our partner designers teach our homeless apprentices to build the furniture in our fully-equipped workshop,’ explains founder Alastair Sloan. ‘Apprentices also work alongside a mentor – a professional and experienced furniture-maker who teaches them valuable skills and ensures a beautiful, crafted final product.’

Reclaimed wood expert Nic Parnell, one of the specialists in the design pool, says the project has emerged at a good time given that the number of homeless people in London increased by 42% between 2011 and 2012 alone. In addition, UK households landfilled around 670 000 tonnes of furniture last year – 45% of which was reusable, according to research from the Waste & Resources Action Programme (WRAP).

As they are the founders of the architectural salvage and design company Retrouvius, it is appropriate that Adam Hills and Maria Speake have reclaimed for their own young family the apartment where Hills grew up. The top-floor flat, built in 1973 by Hills’s architect father, Nicholas, is a classic Modernist design perching among the chimney-pots of an Edwardian mansion block in central London.

Although his parents divorced in 1982, Hills’s mother, Ann, lived in the apartment until her death 15 years later. Hills and Speake never thought that they would live here permanently. ‘We moved in for a few weeks in 1997 and just stayed,’ Hills says. ‘Nothing had been done to the property since the 1970s.’ Needing to accommodate two young children, Marcus and Hal, now eight and six, and a quantity of mainly Victorian furniture inherited from Hills’s grandfather, the couple have learnt to adapt their own historically inspired aesthetic to a modern architectural space. They did this by using colour and texture to link diverse forms and styles: in the living-room is a vintage rug and tapestry, and the kitchen walls are clad in teak strip flooring. This, too, seems fitting since the property was, as Speake says, ‘originally designed for what Modernism was meant to be about – flexibility and the possibility of change’.

At the heart of these changes lies the couple’s passion for re-using old materials in the boldest ways. Teak floorboards from an army barracks and teak laboratory units give the kitchen a mellow glow; a shower room neatly built into a dormer’s dead space is clad in polished fossil limestone salvaged from Heathrow’s Terminal 2 concourse. ‘Our motivation is basically about saving things,’ Hills says. ‘So much architectural material is destroyed. Wonderful things are disappearing right under our noses.’

Reclamation is not, however, a job for the faint-hearted. Retrouvius has rescued 50 tons of cast iron from the old London Patent Office and bought the entire granite facade of the World Trade Centre in Canary Wharf. The Westmorland green slate cladding an eight-storey office block in Blackfriars was also salvaged. No wonder architects adore the company. Meanwhile the design side of the business (they both studied architecture at the Glasgow School of Art), run by Speake, puts salvaged materials into a modern context in clients’ homes. ‘You don’t always need to make a big statement – it’s about using what feels appropriate,’ she says.

‘We moved to London at a time when retro-modern furniture wasuddenly becoming popular,’ Hills says. ‘In Glasgow our work had all been about restoring old buildings, but in London we became interested in materials and the possibility of their re-use in a modern context.’ Twelve of their interior design projects are featured in Hills and Speake’s first book, Reclaiming Style, published this month, which takes readers on a visual journey from demolition yards to stylish, environmentally friendly homes.

Their own home remains true to Retrouvius principles. Take the carpet, which Hills’s father designed for the apartment in the 1970s. ‘When Gavin Stamp, our history of architecture professor at Glasgow, heard we were moving into the flat he said, “You must not get rid of that carpet,”’ Speake says. ‘It turned out he had known Adam’s father and visited the flat in the late 1970s. I’m grateful now that he made us live with it and learn to be sensitive to what already exists.’

And whether that’s a weathered enamel-shaded lamp, sun-bleached curtain linings acquired from a grand old house or the vintage copper-light windows now adorning the Retrouvius shop front in north London, Hills and Speake are determined to give these things a new life. ‘The beauty lies in their faults and imperfections,’ Speake says. ‘Leaving heritage and conservation issues aside, we have found that independent-minded people really warm to this look.’