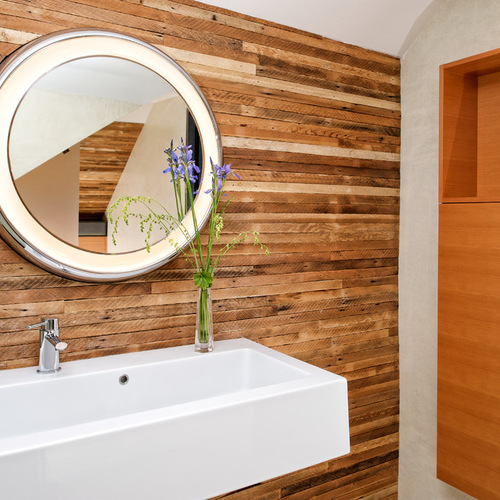 This wood is the lath (as in lath and plaster) from the same walls that were taken down to complete the remodel. It was sanded and refinished to remove nails and other problems, highlighting the hundred-year-old beauty of the reclaimed wood. 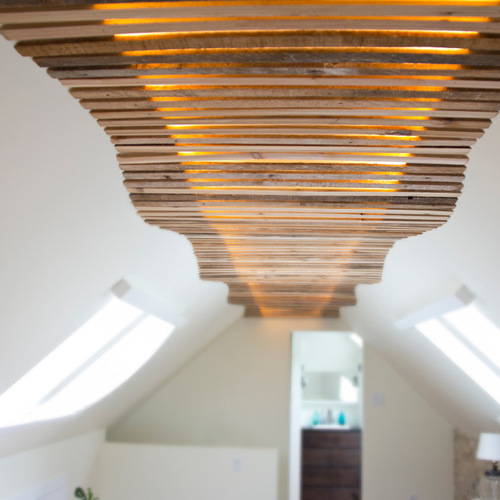 The 25-foot long light fixture is made of reclaimed lath boards undulating along the entire length of the attic bedroom. The light source is warm white LED’s on a dimmer, so the homeowner can adjust the brightness for a dramatic glow at night.

“We wanted to create something that couldn’t be replicated,” explains Madeline Rhodes about the array of edgy thrifted furniture and upcycled barn wood tabletops. Rhodes, a master thrifter and trained visual merchandiser, didn’t have a big budget to work with but wanted to make sure that everyone that walked through the doors felt at home, comfortable and energized by the creative environment. Private conference calls can be placed inside of the makeshift phone booths, and vintage clothing can be purchased in between coffee breaks.

Jerzy ShedlockThe Columbia Wards Fisheries Warehouse, built in 1922, at Kenai Landing is being deconstructed. The materials will be used in local facilities, such as the Dena’ina Wellness Center. Deconstruction is about 50 percent complete.

A former cannery worker likely left this signature, and he wasn’t the only one. Names and dates crowd the warehouse’s structural beams on its top floor.

The wooden warehouse erected nearly a century ago is being deconstructed; its materials sold off to interested parties. Many people buying the high-quality old growth Douglas fir, which was used to construct the warehouse, are former workers, said Steve Agni, Kenai Landing, Inc.’s project manager.

Deconstruction of the building is about halfway complete. The wood is being used in meaningful ways, with a large portion remaining on the Kenai Peninsula due to a purchase  from the Kenaitze Indian Tribe.

Jerzy ShedlockKenai Landing, Inc.’s project manager Steve Agni points out a signature left behind by a former cannery worker. Names and dates crowd the building’s structural materials on the top floor. The mouth of the Kenai River is visible through the window.

Weyerhaeuser Company, one of the nation’s largest building material distributors, is now the exclusive distributor of Barnwood Industries reclaimed wood in northern California, and anticipates expanding distribution soon to other markets. Materials include reclaimed beams, timbers, wood flooring, doors, cabinets and millwork from aged barns and other wood structures. The products bring a sense of historic charm and enduring quality to homes and commercial and government buildings, and can help meet green building goals by reusing building materials. http://www.woodbywy.com, http://www.barnwoodindustries.com