The most satisfying discovery was the stained glass window on the second floor. The former owners covered it with plaster and a cabinet.

“That was fun to uncover and have the light come through for the first time in 70 years,” Shaw said.

The house is a “diamond in the rough,” he said.

“Buying something and being able to bring it back to its potential maybe will inspire other people to move into the area and takes those houses that have good bones, but need TLC,” Shaw explained.

Shaw and Bonfiglio rely on architectural salvage yards in Philadelphia and Woodbury Antiques — a Broad Street antiques mall — for pieces. Shaw pulled rounded top shutters for his exterior third-floor windows from the salvage yards. Bonfiglio found the shutters from The Dakota at the antique shop.

via Want to live in a Victorian mansion?.

“History is and always has been important in this town. There are a lot of old buildings here,” he said after the vote. “To forget and let them go is a shame, and that’s what happened here. There’s been no investment.” 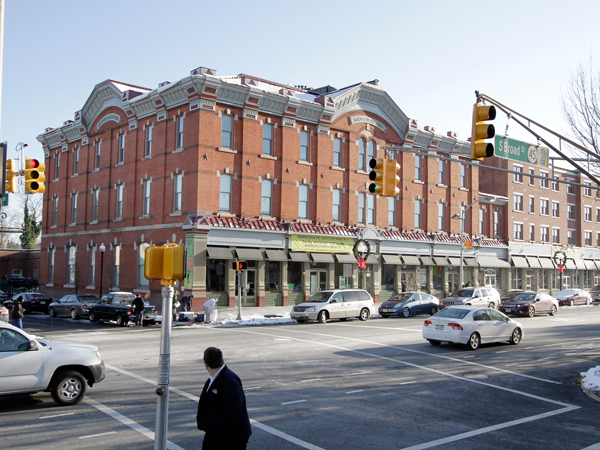 Woodbury unveils the restored GG Green Building, a 133-year-old structure that was considered for demolition just two years ago. Once a theater, developers have turned it into a mixed-use residential building in Woodbury. This is a photo of the building on December 11, 2013. (ELIZABETH ROBERTSON/Staff Photographer) Workers finish up inside the new County Seat Diner in Woodbury. “Woodbury was a historic town center. That was the identity that was stolen from it,” consultant Cindy Williams says. (APRIL SAUL / Staff Photographer)

Woodbury was trying to revitalize its downtown when I was a young reporter there in 1980, and this likable little city hasn’t stopped trying since.

So I’m tempted to suggest “Woodbury: The Work’s Never Done” as a new slogan for the Gloucester County seat.

Fortunately, civic leaders have a better idea. They’re asking citizens, businesspeople, and others to help them come up with the best way to “brand” Woodbury.

The timing looks auspicious: New dining spots are opening; $26,000 has been raised to install a handsome clock at the former train station on Railroad Avenue; and the vacant G.G. Green building on Broad Street is being saved from demolition.

via Kevin Riordan: Woodbury seeks to boost its profile and build its brand – Philly.com.